The slow travellers' guide to Cappadocia

You’ve seen the romantic pictures of hot air balloons floating above rock formations and beautiful breakfasts in an airy hotel room with sweeping views. And so, you’ve decided to visit Cappadocia.

In the middle of arid plains, Cappadocia looks rise a fairytale kingdom, with rock chimneys and winding valleys, hidden churches and underground cities and luxurious cave hotels. The tourist town of Goreme is small and beautiful with sophisticated infrastructure. And all around, is whimsical, magical scenery and long walks through enchanting places. 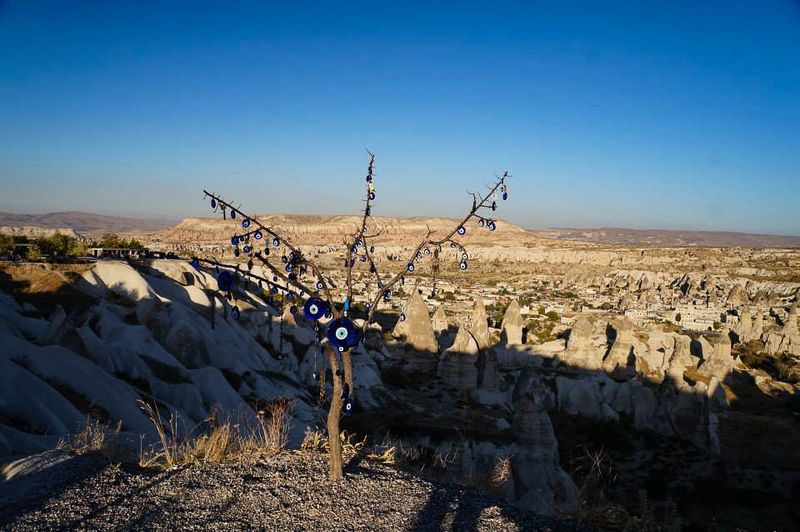 Cappadocia can get very hot in summer and extremely cold in winter (although photos of Cappadocia in the snow look magical) so autumn and spring are the best times to visit. You’ll end up spending quite a lot of time outdoors in Cappadocia, and there are some beautiful hiking trails in the region, so going during more temperate weather is a good idea.

There’s a lot to do in Cappadocia, but it’s a large region and a lot of the sites aren’t easily accessible by public transport. So, unless you want to spend a lot of your trip navigating buses, I’d suggest hiring a car if you want to travel independently. Otherwise, there are a number of day trip options which allow you to explore different parts of the region in a relatively affordable way. The day trips are run by qualified tour guides who can give you more insight into the history and culture of the region. 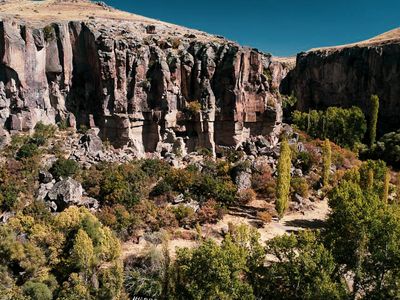 The most popular places to stay are Göreme and Ürgüp. Goreme is a pretty, little tourist village in the midst of the valley. It’s easy walking distance to the Goreme Open Air Museum and a couple of valleys. You’ll find budget and mid-range hotels here, along with a good selection of cafes and restaurants. It’s definitely a good choice if you don’t have car, and you’ll see the magical Cappadocia landscape all around you. It can get busy in the middle of summer, but it’s very pleasant during the shoulder season.

Ürgüp is one of the larger towns in the region and offers a mix of traditional and modern accommodation options. Once again, there’s good restaurants, cafes and shops, with the addition of some nightlife options. There are also some more luxury hotels in Ürgüp if you wanted a more high-end experience.

Other places you could stay include Uchisar, the highest point in Cappadocia where many hotels have amazing views. It’s a little less touristy than Goreme. For a quieter experience, Cavusin is a good option. It’s located within the Goreme National Park and is home to a few boutique hotels. This is good for hiking, but you may want to hire a car if you stay here. 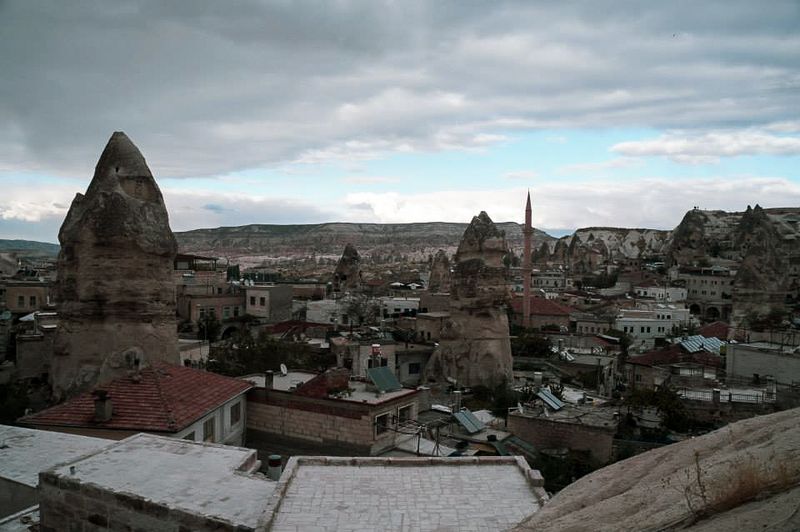 The quintessential tourist dish is the testi kebab. A traditional food in the region, stew is slow-cooked in a clay pot which is broken open at the table. As you’d expect, the meat and vegetables are tender and delicious.

Other than that, you’ll find foods similar to the rest of Turkey: kebabs of different types, pide bread, dried fruit and nuts. Aside, a type of grape molasses, is another Cappadocian speciality. What stood out for me was the quality of the honey and Greek yoghurt in Cappadocia. There is also a long history of wine production in Cappadocia, so you may one to taste a couple of local varieties while you’re there.

This is a long list. The overall best view is probably when you’re in the hot air balloon, looking down at the incredible landscape. If you want to stay on land, there are still a number of places with amazing views: 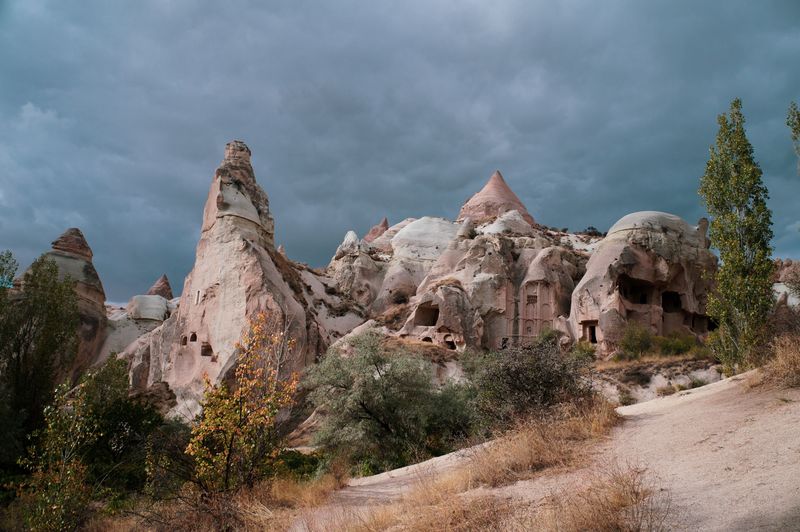 There's a lot to do in Cappadocia. Here are just a couple of the highlights

Wander through valleys studded with fairy chimneys, interesting rock formations and hidden churches. There are many hiking trails in Cappadocia and each comes with beautiful views and special characteristics.

These cities are dotted all around Cappadocia, a refuge for Christians during the years of the Ottoman Empire. The largest is Kaymakli with a large variety of rooms

Visit Goreme Open Air Museum to walk through a range of churches, chapels and monasteries carved into the fairy chimneys from the 10th to 13th centuries. Many of these churches have beautiful frescos painted on the walls. The experience gives you a window into

For the postcard view of Cappadocia, fly over this surreal landscape in a hot air balloon. Up in the air you’ll get an unparalleled view of Cappadocia’s fairy chimneys and valleys, as well as the other balloons. If flying in a balloon isn’t for you, still get up early one morning to watch them hover over the valleys as the sun rises. It’s a spectacular view.

If you aren’t going to Konya, take the opportunity to see a traditional Sema or whirling dervishes ceremony in Goreme. These ceremonies incorporate dance, symbolic dress and music, and represent the spiritual journey to reach perfection. Just keep in mind that no photography, cheering or applause is allowed during the ceremony.

If you’re looking for a shorter glimpse of the whirling dervishes, they perform at the tourist Turkish Nights in Cappadocia. These shows feature folk performances from the seven regions of Turkey and usually include dinner, drinks and belly dancing. It’s completely different to a traditional Sema, but give you a small taste of the real thing.

To see some of the best things in Cappadocia, you'll need to leave your base and go travelling. You can either hire a car and do it independently (public transport can be a bit sporadic) or you can choose one of the day tours, each of which focuses on different areas in Cappadocia.

The Northern Cappadocian tour is the most popular and shows you some of the places closest to Goreme. This tour includes visits to Devrent Valley with rock formations and small fairy chimneys that form a lunar landscape. You will also see animal-like rock formations as you walk through the valley. Next stop is Pasabagi or Monk’s Valley where you’ll see mushroom-shaped fairy chimneys. Other highlights include the Avanas, renowned for its pottery and, of course, the Goreme Open Air Museum which showcases churches and monasteries from the past. 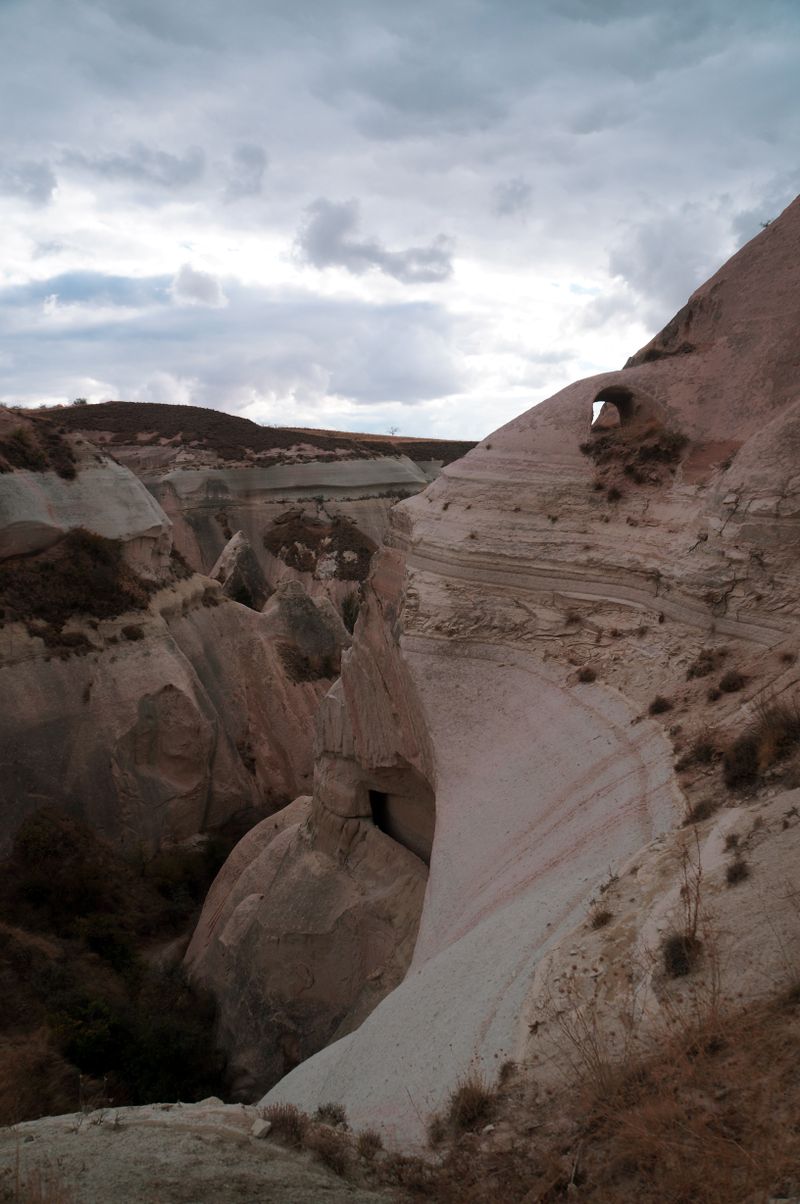 This view of the Southern Cappadocia takes you to Ihlara Valley, created from the ashes of the volcanic Mt. Hasan. Walk through the valley and along the Melendiz River, then continue to Selime where you’ll find hollowed out citadel and cave churches in the fairy chimneys on the steep hillside. In the afternoon, this trip takes you to the underground village of Derinkuyu, where Christian communities hid. This is one of the larger underground cities complete with stables, cellars, storage rooms, refectories, churches and wineries.

This tour starts in central Cappadocia, slightly outside the most visited areas, and takes you through the Red and Rose Valleys, two of the most beautiful valleys in the region. In Cavusin Cave Village, you’ll see a rock castle and the cave dwellings where people lived until the 20th century. This trip also includes a visit to Kaymakli, one of the largest and deepest of Cappadocia’s underground cities. This city is approximately 40m deep and contains all the usual rooms found in an underground city (stables, cellars, storage rooms, refectories, churches, wineries etc.) The day ends in Pigeon Valley where you’ll see dovecotes, old abandoned cave homes and the Greek houses of Uchisar.

This tour is focused on small villages and gives you deeper insight into the heritage of the region. See the Greek houses in the village of Mustafapas (previously Sinasos) and get a window into everyday life in Cemil. Close by, you’ll find the Keslik Monastery, with its painted halls. Sognanli Valley is a highlight with ancient cave churches dotted around the valley. For me, the highlight is visiting the Sobessos excavation site, with Roman baths, tombs and mosaics.

If you’re travelling independently, I’d recommend a number of places on the Green or Blue tours as good day trips:

With its wealth of outdoor activities, interesting views and cave hotel rooms, Cappadocia is a wonderful place to travel with children. From walks through canyons and forests, to hidden churches and underground cities, exploring Cappadocia is a real adventure.

Saying this, it would definitely be a more of a challenge with little children – those under six may struggle with walking the longer distances, or navigating the tunnels in underground cities. In other words, they’ll probably be fine, but be prepared to carry them a fair amount while you’re out and about. The terrain isn’t suitable for prams, but younger children in a front pack will be fine.

There is also a bit of driving to get to some sites, although the distances aren’t usually too far. Older children may also enjoy the opportunity to ride in a hot air balloon or try out a Turkish bath.

Cappadocia is a place where people are friendly and children can have the freedom to run around and explore. In Goreme and the smaller villages, there aren’t too many cars, so walking is fairly safe. We saw a number of children on our trip there and one family in particular said their highlights were the hot air balloon ride and the beautiful organic farm breakfast offered by our hotel. When my little boy is a bit older, we’ll definitely be taking him to Cappadocia.