The wonders of mainland Greece

Mainland Greece is wonderfully diverse. While seeing the beautiful Greek Islands are the main drawcard for many visitors to Greece, there's a huge amount to see on the mainland. With vibrant cities, seaside towns and ancient ruins, Greece is home of the world's most remarkable places. Here are some of our favourites. 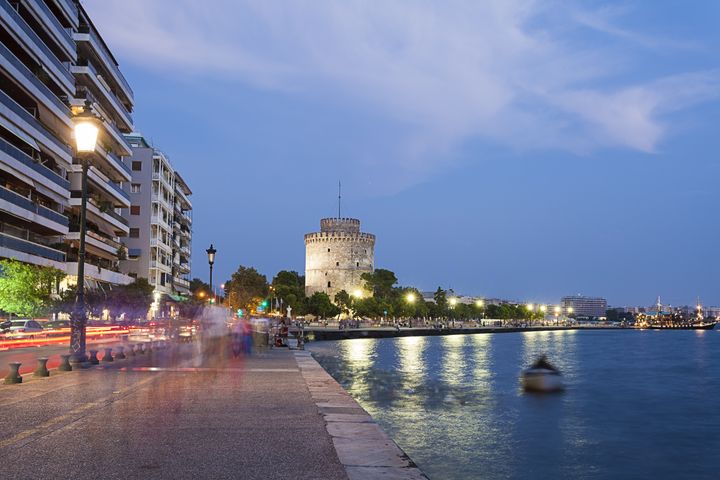 On our first trip to Greece, we started our travels in Thessaloniki. I am a firm believer in travelling to the second city first. Rather than being immediately confronted with the huge and potentially overwhelming metropolis of Athens, consider having a few days in Thessaloniki to ease into the country.

Greece’s second city is lively, fun and extremely walkable. Situated on the harbour, with a statue of Alexander the Great (he was born in Pella, a UNSECO world heritage site not far from the city), it’s more accessible than Athens, with its fair share of historical and cultural attractions. Thessaloniki’s White Tower along the water gives the classic view of the city and the archaeological museum has some interesting pieces.

It's a fun, vibrant city full of restaurants and cafes, shops and friendly people, and it's easy to stumble across bits of culture as you wander around. Visit the White Tower and a museum or two, and enjoy wandering around at night, seeing everybody out, with children playing and dogs running around. The city has a great food scene and is famous for its pastry shops. There’s also something about Thessaloniki that’s distinctly reminiscent of Turkey – a reminder it was only reclaimed by Greece in the early 20th Century.

Stay at the Makedonia Palace near the water and the White Tower. 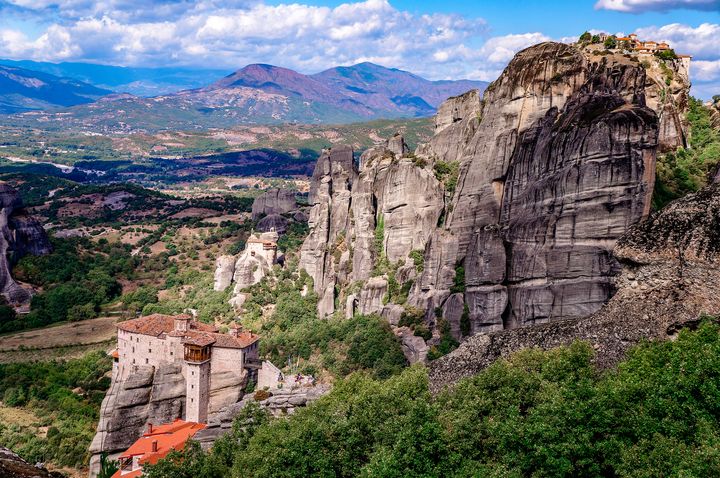 Arriving at Meteora is an extraordinary experience. Huge rocks jut out of the ground reaching for the heavens, with Orthodox monasteries perched on top of them are like something from a fairytale. The effect is stunning and otherworldly.

The valley is beautiful to walk and drive through and, if you have time, be sure to do some of the hikes. You can also drive up to visit some of the monasteries, which are open on alternate days. I found visiting the monasteries a little anticlimactic - they were pretty but unremarkable and full of tourists. Back outside from looking down at them from the hilltop, they regained their romanticism and splendour once more.

Stay at Archontiko Mesohori in Kastraki surrounded by the huge rock formations.

Book a sunset tour to avoid some of the crowds and see the incredible view at its best. 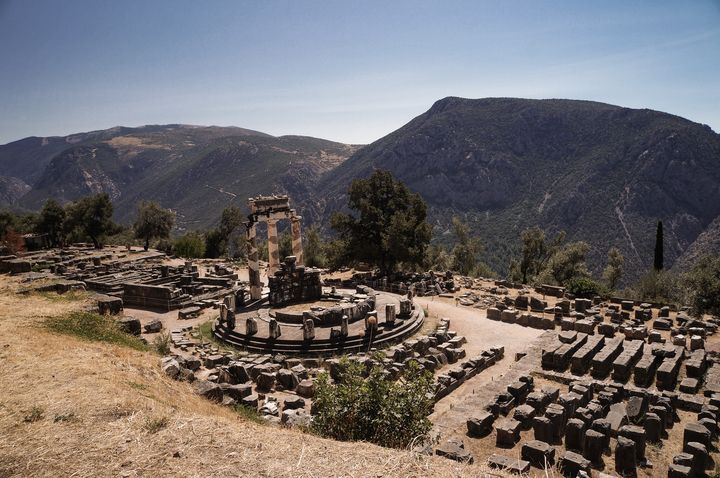 The ancient sanctuary of Apollo at Delphi

If you like history and culture, visiting Delphi may be the highlight of your trip. The ancient sanctuary of Apollo rests on the side of Mt Parnassus. Up in the mountains with an amazing view, it isn’t hard to believe that this is the navel of the world. The Temple of Athena greets you as you arrive, and the ancient ruins are scattered along the side of the mountain as you make your way up the Sacred Way, until you find yourself at the stadium at the top of the site, with panoramic views around you.

There's a stillness and sense of peace to Delphi, especially if you visit in the morning before buses of tourists arrive. If you aren't very familiar with the history of the site, you may find a guided tour useful to help you make sense of what you're seeing. Also take the time to visit the museum there - you'll find some wonderful examples of ancient art and architecture.

Stay at Xenonas Iresioni for comfortable rooms and lovely views. 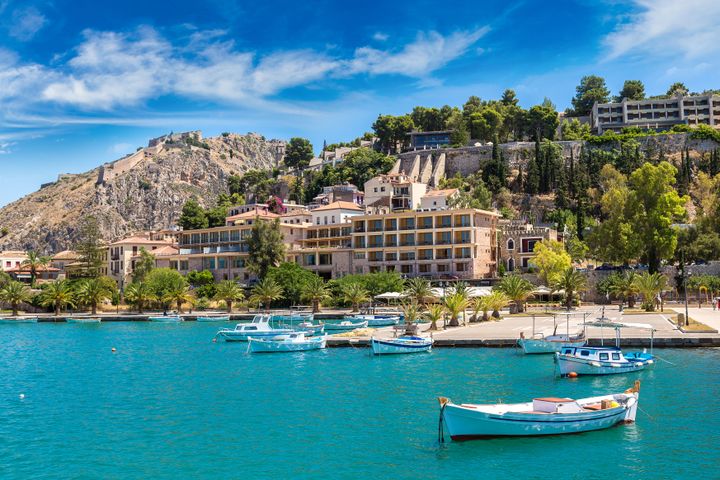 Visiting the beautiful coastal town of Nafplio was one of the highlights of our time in Greece. Only two hours’ drive from Athens, it feels like a different world and I can see why it's been called the most romantic destination in Greece. With beautiful Venetian architecture and old Ottoman buildings, Nafplio was the original capital of the modern Greek state. The old town is small and perfect, and it's easy to spend hours strolling down the narrow streets.

Leaving the historic centre, it's just steps to the waterfront. Here you can take a stroll along the promenade to the nearby pebbled beaches. We especially enjoyed having dinner at a lovely restaurant with a view of the Bourtzi, the old Venetian fort on the tiny island in the harbour.

Nafplio is also a great base for exploring the Peloponnese including the archaeological sites of ancient Olympia, Epidaurus and Mycenae.

Stay at the Amymone Suites in the centre of town or, for something more romantic, opt for the Klymeni Traditional Homes just outside of town. 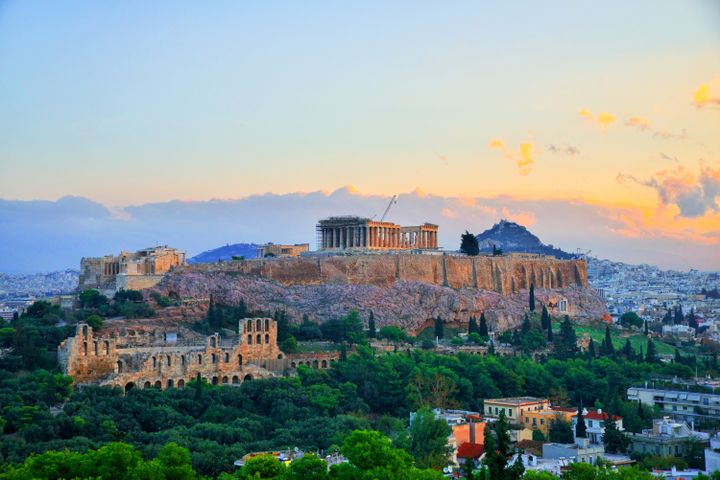 Athens is large, working city, the kind that can feel a little inaccessible when you first arrive, especially if you don't have a local to show you around. To enjoy your time in Athens, I suggest doing your research and carefully picking where you want to base yourself for your stay. Spending a few days here will also give you a chance to get to know the city.

While you're in Athens, visiting the Acropolis to see the Parthenon and other Greek ruins is a must. But also take your time to see some of the other attractions in the city, and be sure to venture out of Plaka, the touristy neighbourhood at the foot of the Acropolis.

Walk through Kolonáki, one of Athens more upmarket areas with wonderful shopping and easy access to some of the less-visited museums. Take the funicular up Lykavittós Hill for breathtaking views of the city, and pick a museum or art gallery to spend the afternoon in - the Byzantine Museum, the National Gallery and the National Archaeological Museum are all favourites. The food in Athens is excellent so try different restaurants and bars and spend a morning wandering through the market.

Stay at the Palladian Home for comfortable rooms with lovely views of the Acropolis. 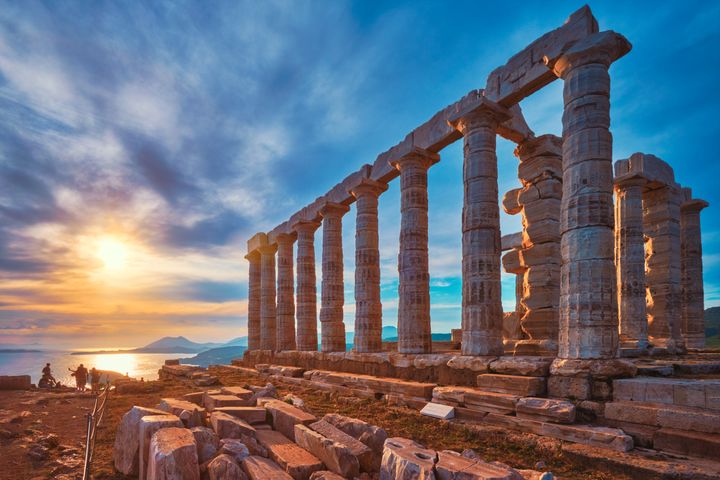 Only around 70km from Athens, this is one of the most beautiful spots in Greece and, on a clear day, you can see some of the islands in the distance. The Cape juts out into the ocean and on the clifftop sits the Temple of Poseidon on the clifftop overlooking the ocean. The scene of the temple against the ocean background is particularly beautiful around sunset.

If you have time, explore the area below the Cape, where you'll find a few secluded coves and bays. To the north, you'll find the main beach, with a couple of tavernas, perfect for lunch or dinner in a spectacular setting. Cape Sounio is the perfect destination for either for a day trip or if you have a few days to spend in the area.

In many ways, Greece is the perfect holiday destination. From white, sandy beaches and clear waters to amazing food and historical sites, Greece has you covered.
More from Greece
About Us Privacy Policy Archive Contact
© 2022 Faraway Worlds.