Where to stay in Athens

From its history to its modern creativity and grit, Athens is an exciting destination. Once the heart of the ancient Greek world, today Athens is punctuated by relics of its past: crumbling temples sit in city squares, while the Acropolis overlooks the city.

The birthplace of Western civilisation is still a vibrant hub of culture, with an intriguing mix of contemporary life and historic streets. Whether you want to stay in a hipster neighbourhood, or prefer to wine and dine in high-end luxury, there is a place for you in this enigma of a city. Best area to stay in Athens for first-time visitors 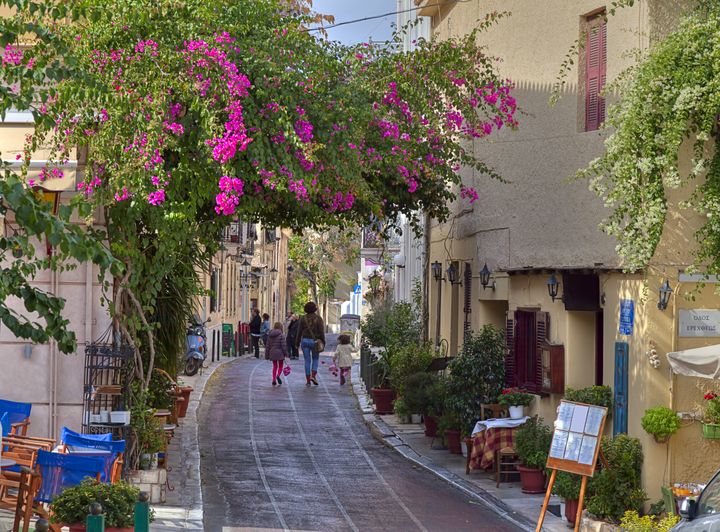 Also located at the foot of the Acropolis, to the north, is Plaka. One of the oldest slices of the city, the district is impossibly pretty; streets feature colourful neoclassical buildings, which follow a maze-like network of cobblestone lanes and alleyways. Ancient Greek ruins are scattered around here, almost casually. Needless to say, there’s a lot to see here.

The district of Plaka is also known as the “Neighbourhood of the Gods” due to its proximity to the Acropolis itself. Many of its streets are pedestrianised, so it’s very easy to simply wander around here to lap it all up, and be transported hundreds if not thousands of years in the past. You still might want to watch out for bicycles and motorbikes though!

In the past, Plaka was known as a nightclub hotspot. But after government reforms, the district became more polished and squeaky-clean. It’s now successfully morphed into a fairly touristed area of Athens, with plenty of souvenir shops and tourist-friendly cafes and restaurants to enjoy. If you’re looking for something off the beaten track, staying in Plaka or lingering too long may not be to your enjoyment, but this neighbourhood still retains its charm and is worth a wander.

Because of this, Plaka has quite a lot of accommodation. It’s popular because it’s close to archaeological sites at the Acropolis. Think mid-range to high-end options, some even with rooftop swimming pools.

Best area to stay in Athens for sightseeing 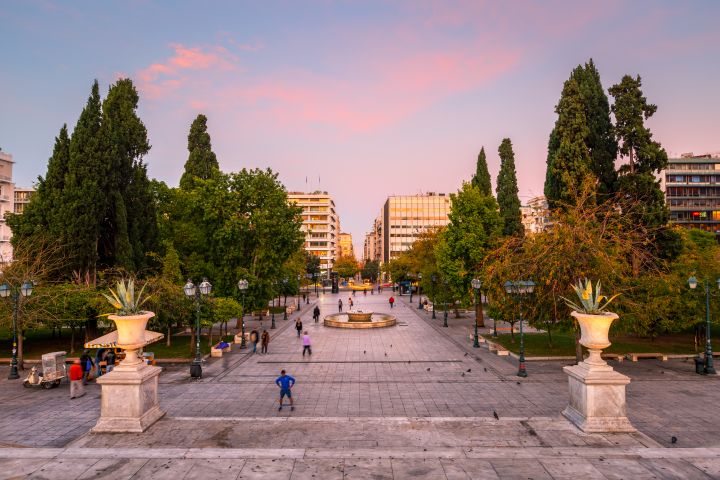 The most central area of Athens, Syntagma is situated around a square of the same name, which is well known throughout Greece as an important landmark. Taking its name from the name of the Greek Constitution, Syntagma Square is home to the Greek Parliament and the Tomb of the Unknown Soldier. Major attractions such as this characterise the neighbourhood.

The Tomb of the Unknown Soldier is particularly famous for its guards. At the changing of these elite guards, called Efzones, they perform a slow, elaborate ceremony that - combined with their traditional uniform - attracts tourists from across the globe.

Syntagma is often busy with visitors to the city, partly because so much accommodation is situated here, and also due to the area’s central location. On the square itself is the iconic Grand Bretagne hotel, a five-star offering that’s a favourite with rich visitors and A-listers. But there’s more besides, from budget digs to mid-range boutique options and even hostels.

Just off of Syntagma Square is the busy shopping thoroughfare that is Ermou Street. This is Athens’ equivalent to London’s Oxford Circus: it’s busy and chock-a-block with shops and restaurants, with international brands and fast food galore.

Nearby you’ll find the National Garden of Athens. This is 24 hectares of rare flowers and plants that makes for a great green oasis in the middle of the city, and a lovely stroll on a spring day.

Stay at the Pinnacle Athens, a small, luxurious hotel near Syntagma Square.

Best area to stay in Athens for luxury Stylish and upscale, Kolonaki is a luxurious slice of the city with fine dining and designer shopping to enjoy. This high-end ‘hood is well known for its chic credentials: everything here, from its shopping opportunities to its grand neoclassical houses, seem to ooze wealth. Its name translates to “Little Column”, a name derived from the actual little column that sits in the centre of Kolonaki Square.

It's another fairly central neighbourhood in Athens, extending from Syntagma Square to the National Gardens and Lycabettus Hill. The district is a particularly charming and leafy one, and is ideal for exploring on foot. There are a number of modern restaurants and terrace eateries, where you can stop by for a bite to eat and drink.

One of the main attractions in Kolonaki, however, is shopping - luxury shopping, that is. Fashionable boutiques and designer shops are the name of the game in this area, and it’s not just international; it’s here that you can find top Greek designers and fashion houses selling their wares too.

If you feel like staying in the lap of luxury while in Athens, then Kolonaki is the place to do that. There are a number of chic hotel options here, with glamorous interiors and elegant rooftop terraces to while away a scorching afternoon.

Best area to stay in Athens for nightlife 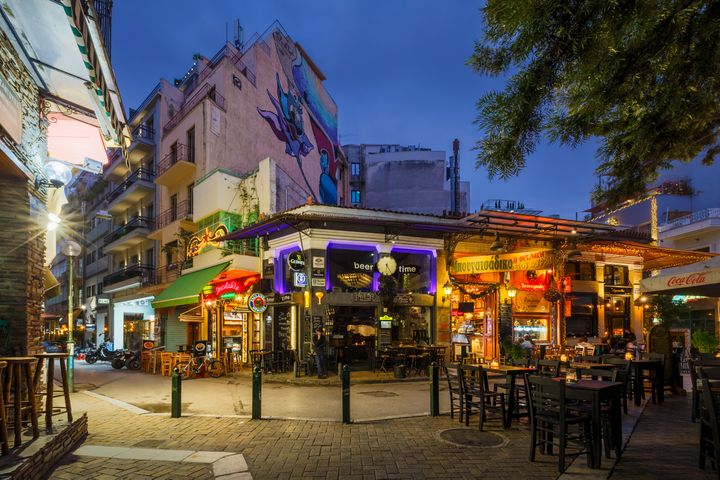 For nightlife lovers, the area to base yourself - or at least make a beeline to in the evenings - is Psyri. It's a neighbourhood on the rise, a trendy hub for young Athenians centred around the lively Iroon Square. The network of streets that spiral from the plaza are a network of entertainment spots, from tiny bars to late night clubs playing host to DJs and live music.

Away from nightlife itself, for those who don’t feel like dancing the night away, Psyri is also well known for its gastronomic credentials. Here you can find small tavernas serving up traditional specialities, as well as chic cafes with terrace seating. And by day, plenty of authentic markets nestled alongside boutique stores.

Psyri is also laced with history. It’s actually one of the oldest districts of the city, and is included within the “Historic Triangle” at the heart of Athens. But its history wasn’t always savoury. In fact, during the late 19th century, Psyri was known as something of a haven for gangs. However, after cleaning up its act, the district is a safe spot with colourful street art adorning centuries-old buildings.

Improved transport connections following the Athens Olympics in 2004 were something that ushered Psyri into the popular modern-day entertainment district it is now. Accommodation, too, has come on in leaps and bounds, with a smorgasbord of boutique hotels and hostels alike.

Best area to stay in Athens for foodies 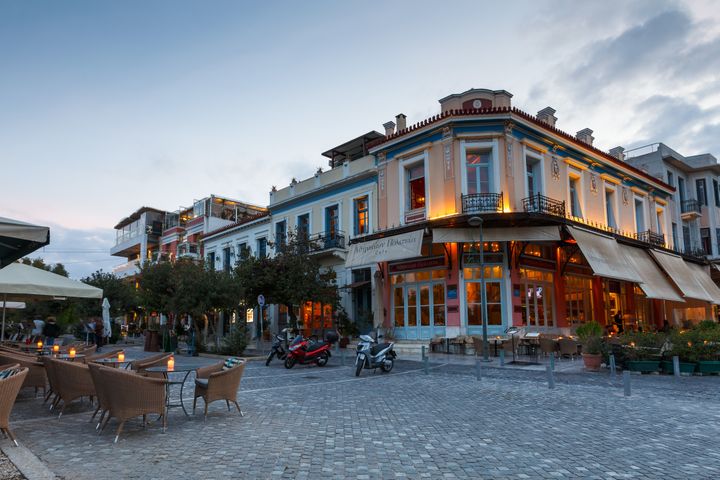 Another historic area of Athens, Thissio is a foodie hotspot characterised by hilly streets lined with neoclassical buildings - and all with views of the ancient Acropolis. There are a whole lot of great tavernas and bistros where you can gorge on classics and sip coffee while watching the world go by. Like Psyri, Thissio is a social hub for cool kids to meet up and enjoy meals and drinks at many of the eateries (and rooftop restaurants) in the area.

The name Thissio actually comes from the name of a temple of the Greek god Hephaestus, the god of fire and a patron deity for blacksmiths who worked in the area. The temple - still standing to this day - was mistakenly thought to be a temple to Theseus, the semi-legendary founder-king of Athens, and the name stuck.

In recent years the neighbourhood, and its pedestrianised streets and leafy sidewalk cafes, have attracted not just locals but also visitors to the city. It's a great place to come to experience a slice of local life and soak up the atmosphere at street level. In the summertime, you'll see people enjoying meals out on the terraces, or heading to the outdoor cinema to catch a movie or two on an evening.

In terms of accommodation, the district has a handful of mid-range hotels to its name - some of which boast views of the Acropolis. One of the best things about Thissio is its location: it's just to the southwest of Monastiraki, close to the city centre but within walking distance to Plaka and other interesting neighbourhoods.

Best area to stay in Athens for a local experience 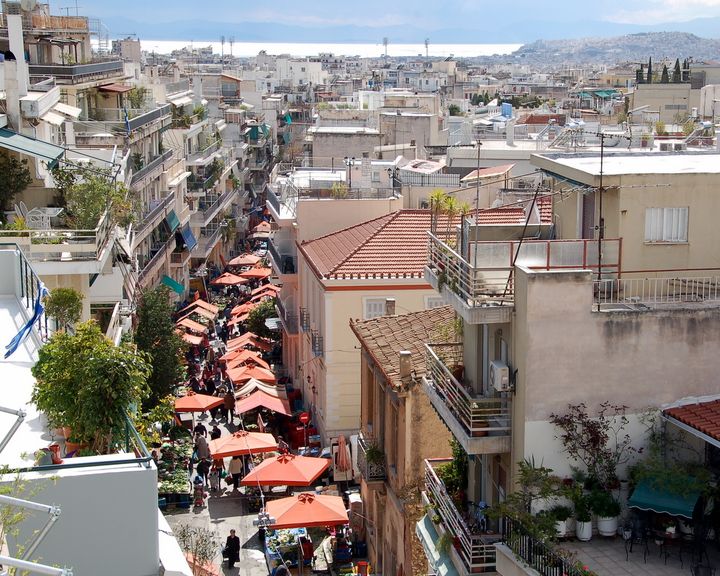 Brimming with creativity and cool, Koukaki is a beautiful neighbourhood in the centre of Athens. You’ll find it situated to the southeast of the city under the watchful gaze of the Acropolis; like other neighbourhoods in this ancient city, Koukaki is also old. Streets here are charming and packed with colourful houses, with sidewalks shaded by trees.

In recent years, the area of Koukaki has gained more and more attention as a hotspot for artistic types, and is sometimes cited as the hipster area of Athens. However, this wasn’t always the case.

You may not naturally find yourself in Koukaki, as there aren’t many tourist sights in this area. However, if you choose to base yourself here during your trip to Athens, then you’ll be able to discover a more local side to life in the city, seeking out tiny bistros and coffeeshops for a bite to eat. In the evenings, this neighbourhood has a warm buzz to it, with locals out enjoying meals and drinks with friends.

Accommodation here reflects the area: artsy and unique. As well as these interesting boutique offerings, there are also a number of Airbnbs and self-catering options for those who really want to live like a local during their Athens adventures.

Stay at the NLH FIX Hotel with an on-site spa or for a longer stay opt for an apartment with kitchenette and laundry facilities.

Planning a trip to Athens? Read our 3-day Athens itinerary or our article on Greek travel costs.