Almost every bucket list features a Greek island, perhaps the white villages of Santorini or the windmills of Mykonos. And there are good reasons why. The water around the Greek islands is blue and silky, the white villages on the cliffs glow softly in the summer sun, and delicious food and warm hospitality are in ample supply.

This Greek island hopping route takes you from Athens to the eastern coast of Turkey, through some of the most famous islands of all. You'll want to spend at least a week on this route if you visit all three islands (Mykonos, Santorini and Rhodes) but 10-14 days would be a more comfortable pace. Keep in mind that you'll also spend one night on the ferry between Santorini and Rhodes. 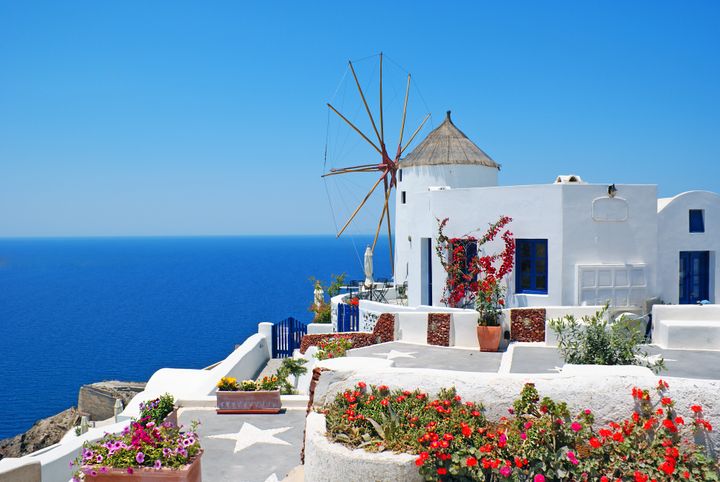 I've given a suggested range of nights to spend on each island, however, I do prefer travelling slowly, so you may wish to travel at a faster pace. Keeping in mind travel time, you'll need to give yourself at least 2-3 nights per destination. Saying that, Rhodes is large enough that it would take at least a couple of weeks to explore the island.

The Cycladic islands, where we start, includes some of the most popular islands, including both Mykonos and Santorini. Ferry connections are good in this island group and travel between the islands is easy. Our first stop is one of the most famous islands of all - Mykonos. 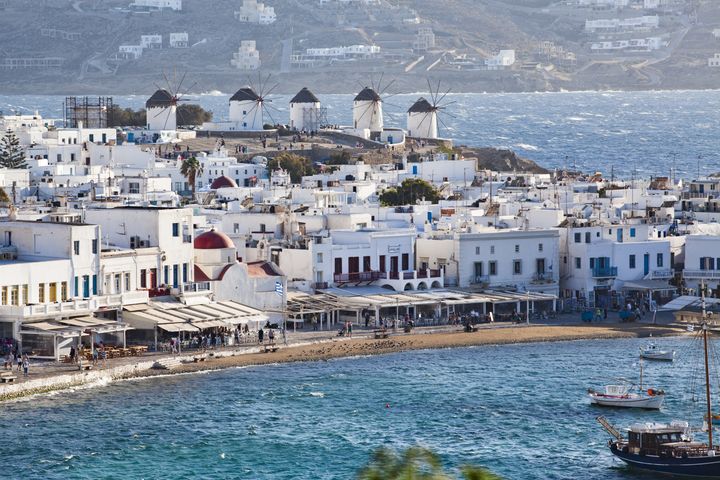 Your ferry from Athens will leave from Piraeus Harbour, which is out of the city centre. Many ferries to the Cyclades leave early in the morning, so you may want to spend a night in Piraeus before you go, rather than commuting from central Athens. The ferry from Athens to Mykonos will take around three hours, and there are regular ferries throughout the year.

As you get close to Mykonos, you'll find yourself staring at the postcard Greek Island view - the white houses set against the golden hills and deep, blue water. Stepping off the boat, you'll find yourself in a white, clean town, surrounded by restaurants, boutiques and high-end souvenirs. Renowned for its parties, shopping and clear waters, Mykonos has a number of different sides to its personality.

In the Mykonos Town, Cats sleep in doorways and people enjoy long lunches, leisurely strolls through the tourist sites and drinks with sea views. The old town is full of expensive shops and art galleries, while the nearby resorts are famous for their Hedonistic atmosphere. There are also a number of good bars and clubs to choose from. 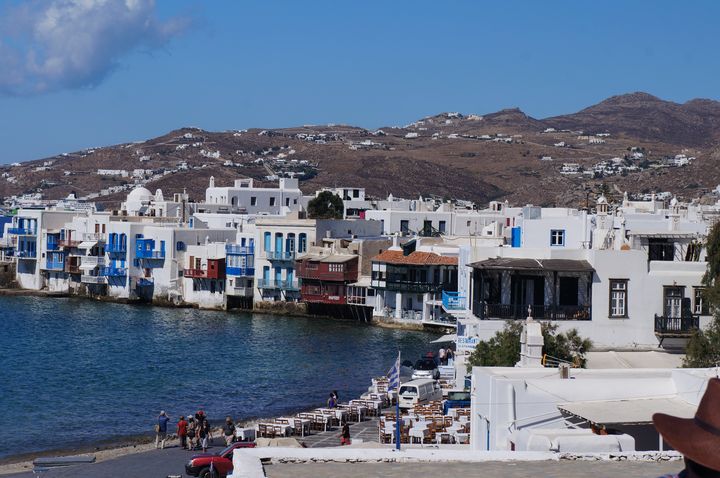 Elsewhere on the island, you’ll find a quieter, more laidback vibe, where you can relax at the beach, only escaping to a nearby taverna for meals. Mykonos is also beautiful from the water and going a day cruise or hiring a boat will allow you to explore the smaller islands off shore. It's a beautiful, charming place, with incredible photo opportunities around every corner. Saying that, it's also firmly on the tourist trail, with visitors from all ages and nationalities.

From Mykonos, you can also visit the ancient island of Delos, the legendary birthplace of the gods Artemis and Apollo. It's an impressive archeological site, which isn't yet fully excavated with beautiful views from the hilltop. Visiting Delos is easy from Mykonos with boat transfers, morning or evening guided tours to choose from. 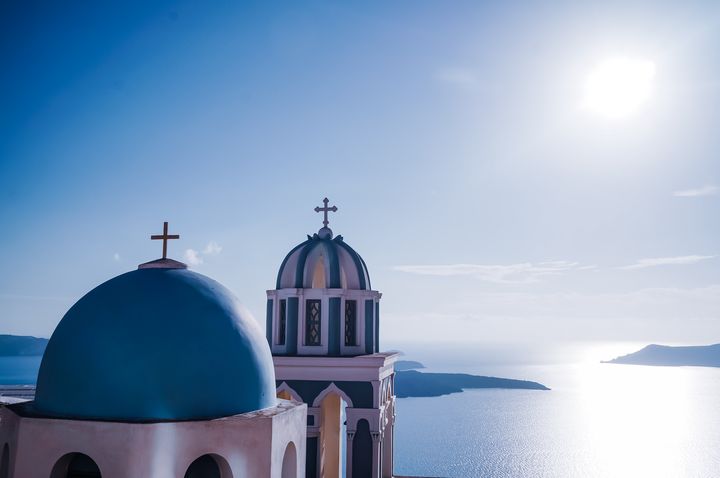 Of course, no trip to the Greek Islands is complete without going to Santorini. The famous island with its stunning sunsets, Santorini lives up to the hype. With white houses, blue roofed churches and a spectacular clifftop walk, Santorini is worth visiting just for the views.

One of the most popular places to stay in Santorini is Fira, the main town, where you have easy access to good food and clifftop walks. The views from Oia are also magnificent and taking the route along the coastal cliffs from Fira to Oia is simply magical.

A bit further afield is the small town of Pyrgos, all white houses and narrow streets. Despite first appearances, there are also a number of beaches in Santorini, including popular Perissa, a long, black sand beach. You can also visit a several other coloured beaches and volcanic attractions. From Fira, it's easy enough to use the local bus network to get around the island, although there are also tours which take you to the major sites if you prefer. 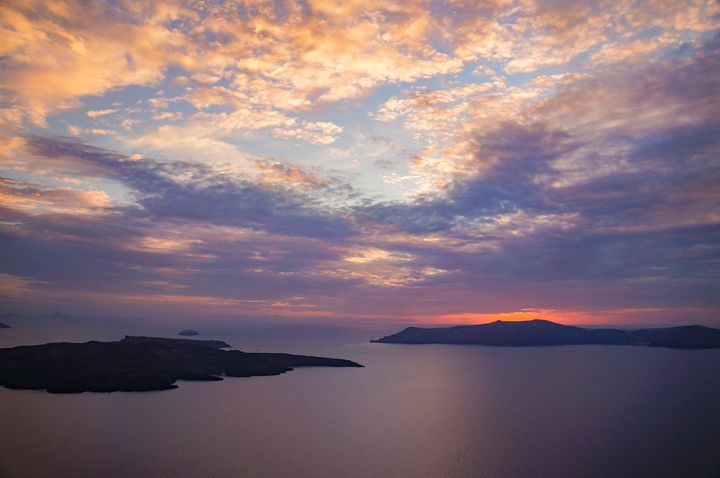 Santorini is one of those places that definitely lends itself to splurging. Spend at least a couple of nights on the island and stay somewhere with a caldera view (a surprisingly affordable option in the shoulder season) and watch the sunset from Oia at least once. With volcanic beaches and interesting white villages, you should have plenty to keep you busy during your stay. If you enjoy getting out on the water, consider taking a boat trip to the nearby volcanic islands or going on a sunset caldera cruise to see those incredible views from a different perspective.

Santorini also offers a direct ferry to Rhodes, which is a vital stop on the way to Turkey. Take the overnight ferry from Santorini to Rhodes and make sure to book a cabin - while it's expensive, you'll thank yourself in the morning! 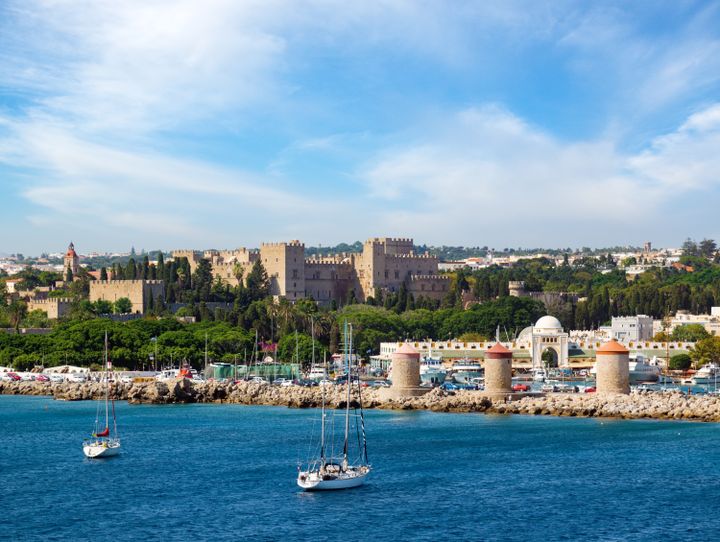 Rhodes is in the Dodecanese Islands, in the southeastern Aegean sea. Here you'll find medieval towns dotted with ancient ruins and some modern resort towns clearly aimed at mass tourism. If you're staying for a while, take your time exploring the island - and you'll really need to hire a car to make the most of it.

Rhodes Town is a traditional medieval walled town, set on the harbour. There you can find restaurants, markets, churches and more. There are plenty of tourist traps to avoid but also a number of hidden gems. One of my favourite experiences was eating tzatziki in an alley bought from a literal hole in the wall.

If you're after a cheap resort stay, Faliraki is an affordable option. The town itself is ridiculously touristy, but also empty, developed for more people than have come. The effect is relatively peaceful, yet slightly depressing, but the beach is beautiful and there's a range of nice resorts with pools and Western menus at backpackers prices. It's also a popular destination for nightlife, especially in the peak season. If you would prefer a low-key beach experience, head to Archangelos and the beautiful Stegna Beach. 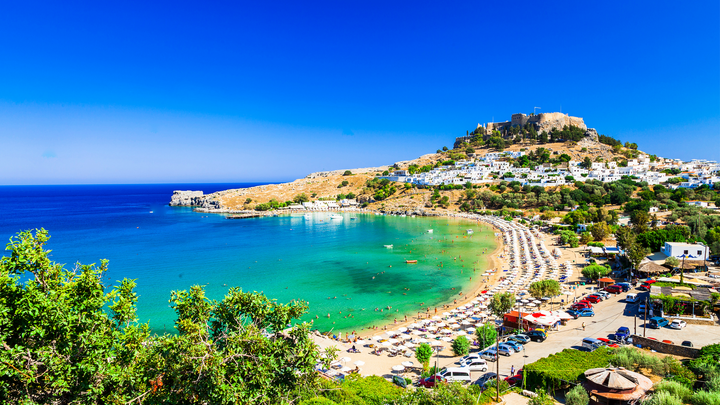 For a more authentic view of Rhodes, continue on to Lindos, where you'll find white buildings, panoramic views and an ancient acropolis. It's a charming town, with a lot to see, friendly locals and barely a resort in sight. We happened to be in Lindos during a World Tourism Day festival, where we were one of only two groups of tourists there. It was a fun night eating and drinking with the locals in the square and watching the traditional Greek dancing.

Other highlights in Rhodes include Rodini Park, the oldest park in the world, and the Seven Springs, a lake with views of the mountain. Ladiko, a small bay near Faliraki, also makes a great beach trip. Closer to Rhodes Town, Filerimos Hill and Butterfly Valley are also worth visiting. If have the time to go further afield, be sure to visit the quiet, secluded beaches on the southern tip of the island.

From Rhodes it's a relatively short ferry trip to Fethiye in Turkey. A traditional, working town, Fethiye is an interesting place to spend a few days, with good bus connections to some of Turkey's famous attractions.

Stegna Beach: Bouganville Studios for apartments at the beach

Athens to Fethiye itinerary in brief

The Greek islands are really are worth the hype. Tourists have been visiting these places for a very long time and it shows. One of the best things about visiting the Greek islands is that you can have completely different experiences, depending on which island you visit. Each destination has a wonderful sense of identity and personality, and there's something for every travel budget.

This itinerary offers an opportunity to see the some of the most famous Greek islands, while making your way to Turkey. If you have the time to spend a few days on each island, there's plenty to explore and discover. And when you arrive in Turkey, you can immerse yourself in a whole new country and culture.