Zambia feels like it has a plethora of hidden gems. Lake Tanganyika is one such gem, but as it’s over 1,500 kilometres from Victoria Falls, few make the journey. Lake Tanganyika sits at the northern most point of Zambia and its waters are shared with Tanzania, Congo and Burundi. The 19th century explorer, David Livingstone famously said that Lake Tanganyika was “an area of unsurpassed beauty”. Over 100 years later this still holds true.

Lake Tanganyika is the world’s longest freshwater lake (around 677km) and sits along the Great African Rift Valley. This breathtaking lake is home to Zambia’s secret “beaches”. During your visit, you can also enjoy neighbouring Nsumbu National Park, have some watersport adventures, and visit the nearby waterfalls. This part of Zambia really does have it all. 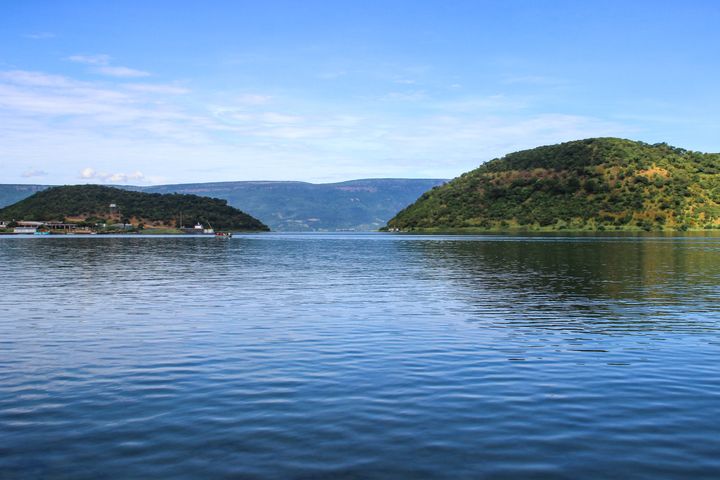 When to visit Lake Tanganyika

Zambia is a country defined by its wet and dry seasons, so knowing when to visit certain locations is a must. Not only is it important to know when to travel for your actual holiday but also so you know you’ll be able to get there (roads become impassable!).

Zambia’s rainy season is typically between mid-November and April, you should avoid this time entirely! Trust me, it’s simply not worth being stuck in a car, caked in mud, trying to dig yourself out of a ginormous puddle. Between May and mid-August it's technically Zambia’s “winter”. Whilst the mornings are a little nippy, once the sun is out, you’ll be jumping in Lake Tanganyika with no reservations.

Many argue the best time to visit the lake is between August and mid-October - during this time, a tropical paradise awaits. This is also one of the best times to visit the Nsumbu National Park, as elephants in search of water can be seen drinking at the lake. It is also way more feasible to drive there, as the roads will be dry and in better condition. 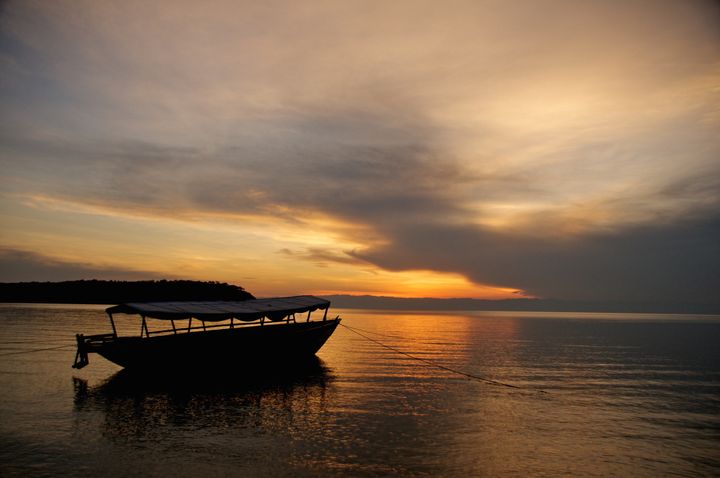 How to get to Lake Tanganyika

I must admit, planning a trip to Lake Tanganyika can feel a little daunting. There isn’t a wealth of information out there to help you plan. But this is the first of many signs that this is a great place to visit. Aren’t the best places always ones that feel barely discovered?

There are a couple of routes you can take to get to this Northern Province gem.

Via road from Lusaka

A word of warning: don’t rely on Google Maps in Zambia! Word of mouth is key for travelling around the country. Once you know the cities or towns you need to pass through you should be alright.

There are currently no scheduled airlines flying to Lake Tanganyika. However, Nsumbu National Park has an airstrip. If you’re booking with Ndole Bay Lodge, they can help organize a chartered flight to Nsumbu’s airstrip. 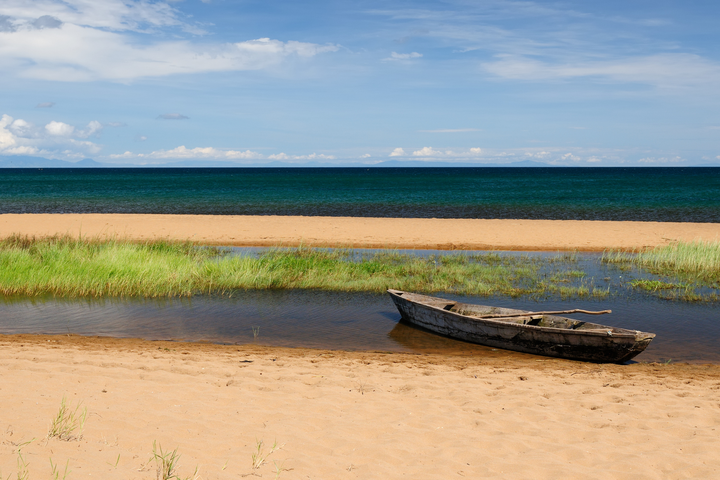 Where to stay at Lake Tanganyika

The east banks of Lake Tanganyika are so remote that there really is only one option of where to stay, and that’s Ndole Bay Lodge. As Ndole Bay Lodge is one of your only accommodation options, it’s a good job they provide literally everything you could possibly want.

The lodge offers deluxe beachfront chalets, suites, standard chalets, and they have a campsite. We are talking about one of the most remote parts of Zambia, so there is no surprise that if you’re camping, you must come fully prepared. This includes, a tent, cooking equipment and provisions. The lodge itself has a restaurant and a cosy hang out space as well as a bar. 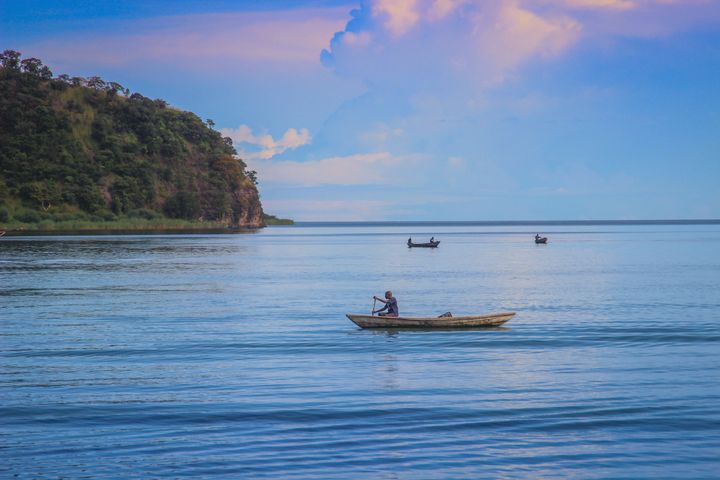 Things to do in the Lake Tanganyika area

While you may want to visit to relax and escape everyday life, there's a surprising amount to do at Lake Tanyanika. As you may expect, there are a number of water sports to choose from, but you can also head to the nearby national park to see some of Zambia's wildlife.

One of the best things to do whilst at Lake Tanganyika is to jump in the water and get involved in some of the fantastic watersports they have on offer. Snorkeling is one of the best activities you can try. Right outside of Ndole Bay Lodge there is an excellent reef that has been protected for quite some time. If you’re staying at Ndole Bay Lodge, then there is snorkeling equipment free for you to use. Head there early in the morning as it’s the best time to see the fish. Snorkel and you’ll see many cichlids, in fact this freshwater lake has around 200 species of cichlid. Once underwater, you’ll completely forget you’re in a landlocked country.

Ndole Bay Lodge also offers scuba diving, they are the only registered dive facilities in the entire country. Ndole Bay Lodge really does have it all. It’s a one stop shop for exploring Lake Tanganyika. There are even several diving and accommodation packages you can choose, saving you some money on your trip. If that wasn’t enough, they also offer waterskiing, wake boarding and tubing excursions. 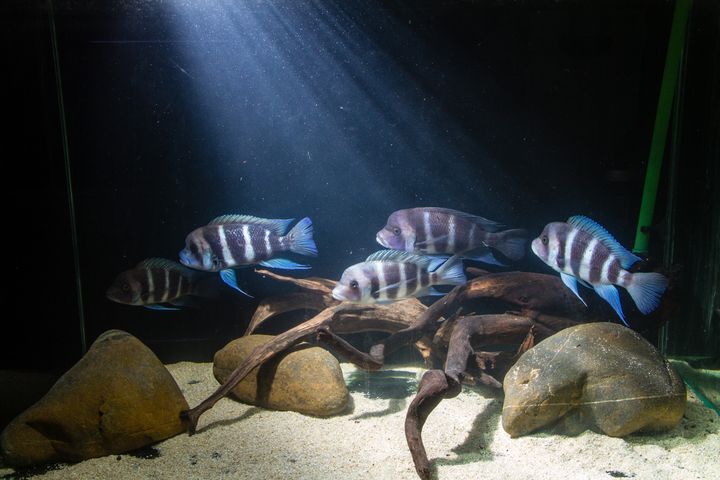 The Nsumbu National Park is one of Zambia’s most remote national parks. Nestled in northern Zambia along the shores of Lake Tanganyika, Nsumbu is only accessible via the lake or on foot. Ndole Bay Lodge offer boat cruises instead of game drives because the park isn’t accessible via road (or dirt tracks). Safari boat cruises are an amazing experience anyway but given that many animals come down to the lake to drink, it makes for some superb wildlife viewing. Expect to see herds of elephants, hippos, crocodiles, puku (antelope) and blue duiker.

Ndole Bay also offer a few guided walks within Nsumbu National Park. Zambia is the land of the walking safari, and this is a spectacular way to see this remote and idyllic national park. Head along Kala Bay and to the sand dunes, for one of the best places to see herds of elephants. 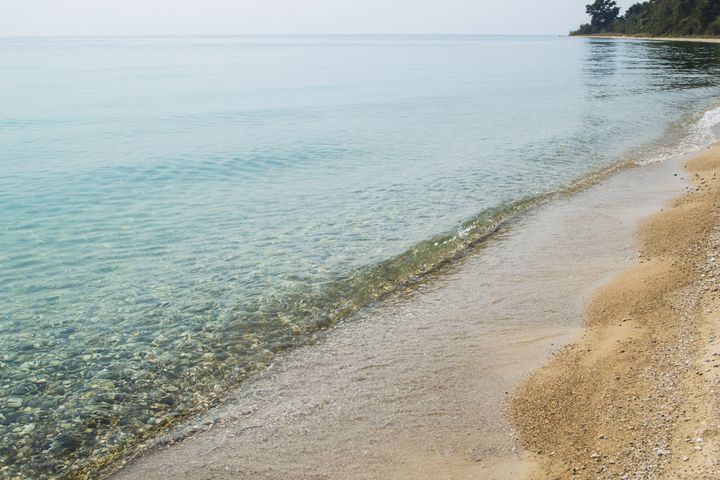 Relax on a beach

In between adventures and excursions there will be some time to relax on Zambia’s premier “beach”. Despite it not being an ocean beach, spend just a few moments at Lake Tanganyika’s beaches and you’ll forget you are around 1,150km from the nearest ocean (the Indian Ocean, Dar es Salaam, Tanzania). In addition to Ndole Bay Lodge’s large beach, there are a couple of other small beaches, including Chisanse Beach and two unnamed spots opposite Nsumbu Island.

Lake Tanganyika is remote, and it may feel daunting planning a trip to this part of the world. It is also somewhat difficult to reach, but once you arrive, you’ll feel glad that it took a bit of work to get there. Once there you won’t want to leave. Lake Tanganyika feels like you’ve just been let in on one of Zambia’s biggest secrets. Zambia is one of Africa’s best kept secrets. It is filled with an abundance of natural wildlife, water and landscapes that have barely been touched in comparison to many tourist destinations.
More from Zambia
About Us Privacy Policy Archive Contact
© 2023 Faraway Worlds.