Discover the Skocjan Caves in Slovenia

A UNESCO world heritage site, the Škocjan Caves have some of the largest underground canyons in the world. Walking through these caves are truly spectacular, with breath-taking caverns, a rushing underground river and huge spaces beneath the earth.

You can explore the caves through taking an underground tour into their depths, following the path of the Reka River, or doing a circular walk above ground. For the best experience, do them all! 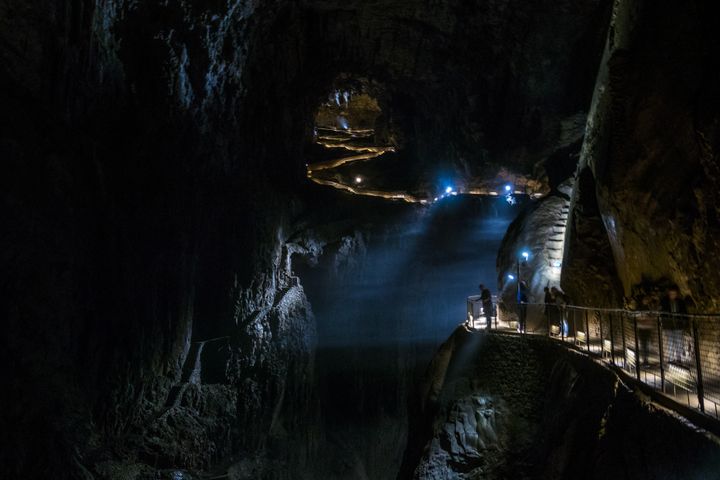 Visitors have three choices on how to experience the caves:

The most popular way to visit the caves is by taking the guided tour through the caves (18 euros per adult). It's a 3km route, with some remarkable sights along the way. The first cavern is the Silent Cave, filled with stalactites. Further in is the Great Hall with two huge stalagmites - the “Giant” and the “Organ”. The highlight is crossing the gorge, high above the underground river flowing through an enormous cavern.

Another option is to follow the Reka River on its path underground. This 3.5km route starts at the cave's natural entrance near the Škocjan village and allows you to choose whether or not to walk independently or with a guide. 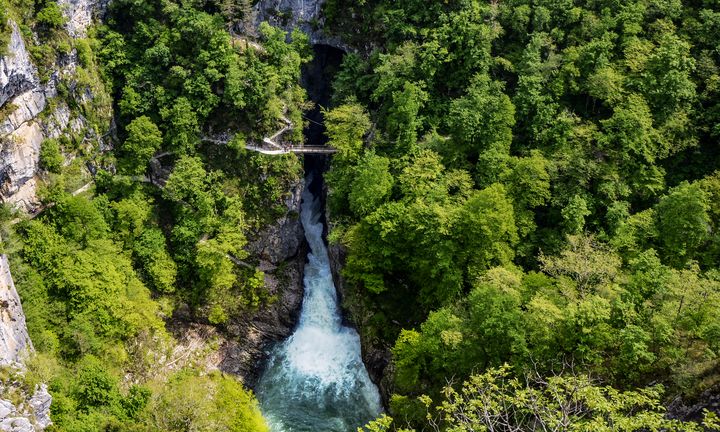 If you'd rather not venture underground, the Škocjan Education Trail is a 2km circuit around around the Big and Little Collapse Dolines, natural compressions in the earth, home to some interesting wildlife. It also takes you through the villages of Betajna, Matavun and Škocjan and, once again, you can go with a guide or by yourself.

Our experience visiting the Škocjan Caves

We arrived in Ljubljana, Slovenia, in the middle of a wine festival in the city centre. Not only was the festival a wonderful introduction to a beautiful, small city, but it was also the perfect time to get locals’ advice about what to see and do in the country. One activity popped up again and again – visiting the Škocjan Caves. 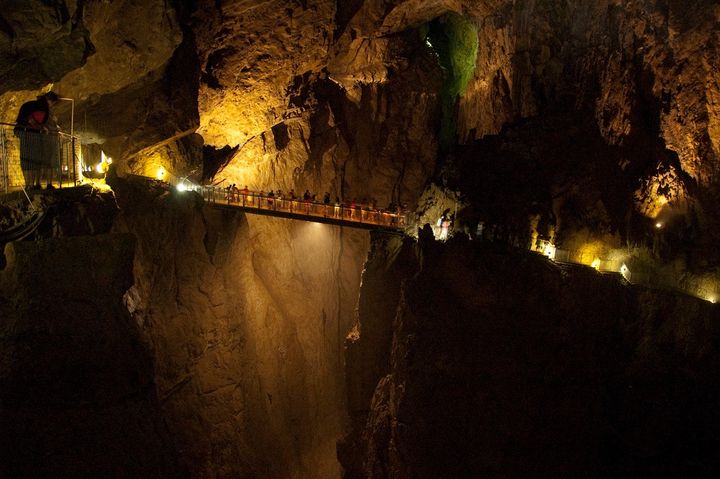 We took a train and a bus to get to the caves and, on arriving at the entrance, discovered that there were regular tours through the caves. We signed up to the next one and found ourselves entering the caves in just a few minutes. As we entered, the temperature dropped immediately and the path became narrow, with relatively low ceilings. This was the man-made tunnel into the vast, underground caverns.

When we emerged from the passage into the natural cave, we found ourselves in a series of caverns, connected by a walkway. Spotlights highlighted the trail and key features of the cave around us, including some impressive stalactites and stalagmites adorning the ceiling and ground - the largest stalagmite in Škocjan Caves is over 47m from the ground to its tip. 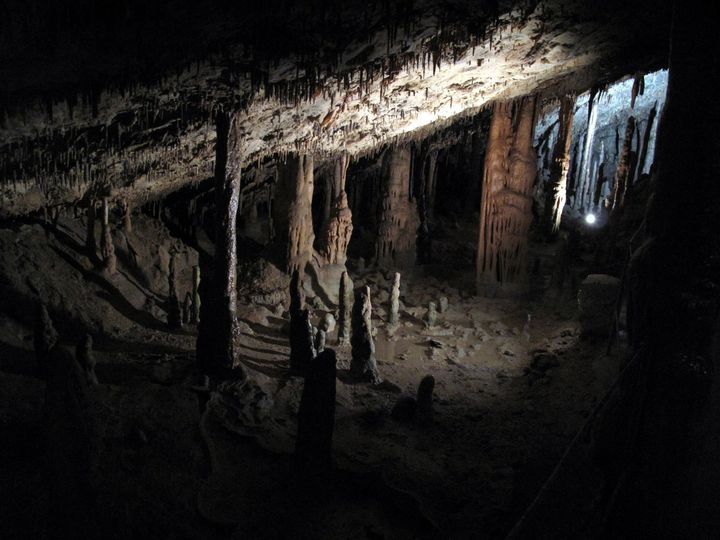 Following the guide closely (no one wanted to be left in darkness when she turned out the lights), we found ourselves in an enormous empty space, with the gushing of water clearly audible and the river below barely visible. This was the great underground gorge of the Škocjan Caves, a truly remarkable and awe-inspiring space to see. Everything - bridges, boulders and stalagmites - looked small in this huge space.

The Cerkvenikov Most is a narrow bridge crossing the river and the canyon. Walking across it was beautiful and slightly terrifying and I was reminded of a scene from the Lord of the Rings. Soon after we crossed the bridge, we could see daylight in the distance, and we emerged from the cave into the sunlight, with beautiful greenery and the rushing Reka River at our feet. The subsequent walk along the river was gorgeous and light, but couldn't compare to the majesty of the dark caverns below. 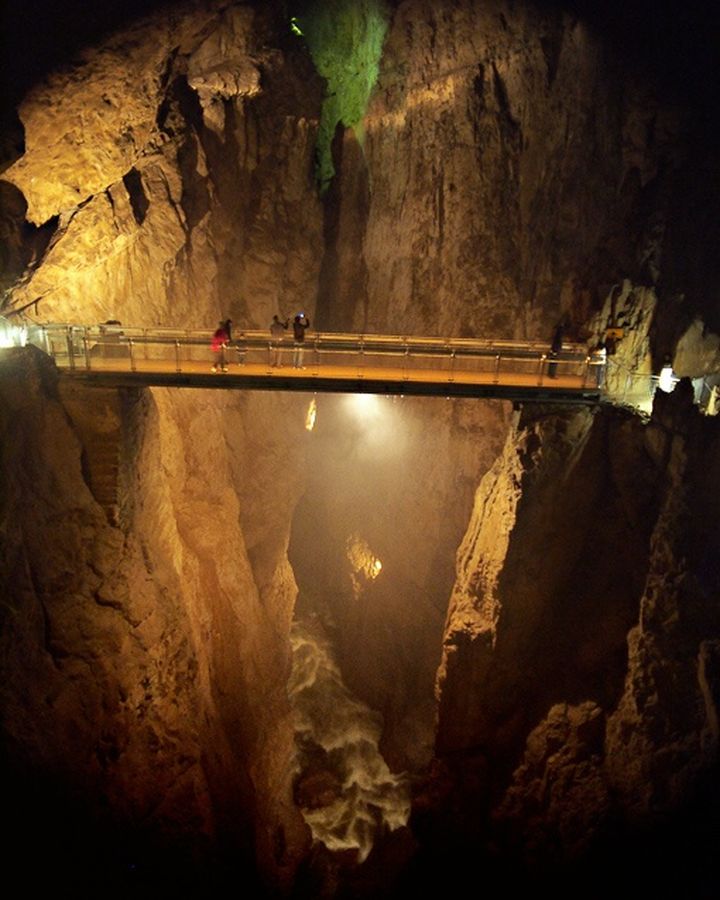 The gorge in the Škocjan Caves. 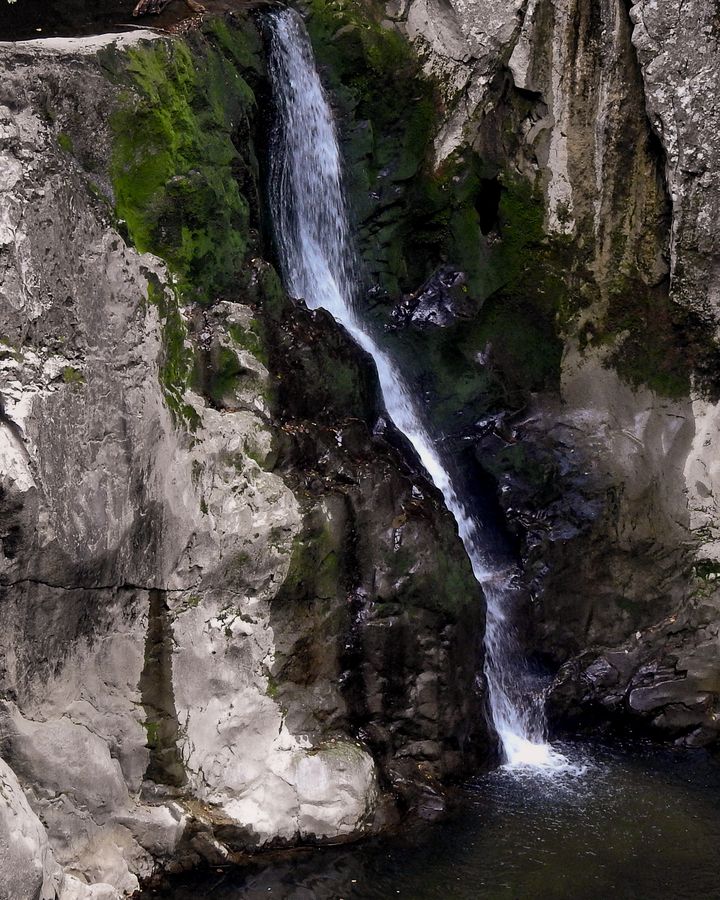 The Reka River waterfall just before it enters the Skocjan Caves

When to visit the Škocjan Caves

Regular guided tours through the underground caverns are available from April through to October. The aboveground walkways are usually accessible all year round. Check the official website to confirm tours are available when you visit.

Getting to the Škocjan Caves from Ljubljana

The Škocjan Caves are located 4km from the town of Divača in south-western Slovenia. From Ljubljana, it takes around an hour to drive to the caves and there is also public transport available.

You can also do an organised tour to the caves from Llubljana if you prefer.

Formation and history of the Škocjan Caves

Over more than a million years, the immense Škocjan Caves have been moulded by the Reka River flowing beneath the ground. The river's source is 55km away, where the river flows above ground, before entering the caves through a passage and flowing underground for over 35km. 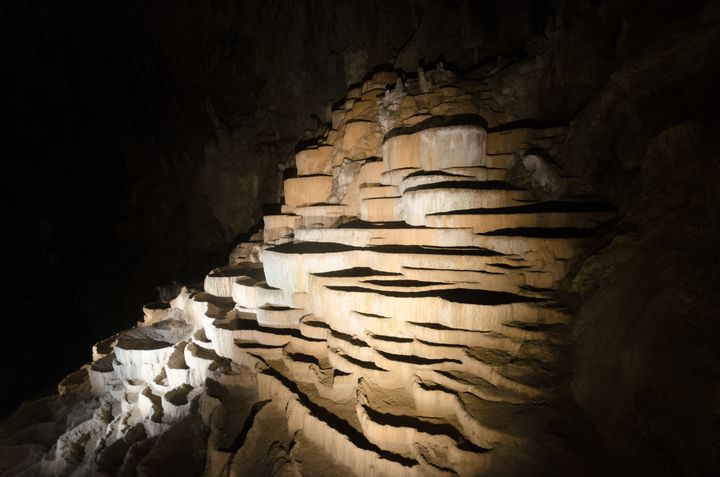 xiquinhosilva, CC BY 2.0, via Wikimedia Commons

These caves are wonderful examples of karst, where water has carved out the impressive the caves over a long period of time. The travertine terraces which water created as it flowed down the limestone are still visible in the caves.

Eventually the river enters the Škocjan grotto through a passage and travels for more than 35 kilometres (20 miles) underground. The Škocjan Caves are great examples of karst, where dissolvable rocks (like limestone) are shaped by running water.

According to archaeological studies, people have lived in the caves and surrounding areas for more than 10,000 years, including the Mesolithic, Neolithic, Bronze and Iron Ages right up to the Middle Ages

If you're spending some time in Slovenia, head to the beautiful capital of Ljubljana next, and if you're interested in seeing more caves, visit Postojna Cave in south-western Slovenia. Otherwise, consider making your way towards the coast and the lovely town of Piran. From there, it's an easy trip to Croatia and the stunning Dalmatian Islands. Known for its lakes, caves and castles, Slovenia is a small, beautiful country on the northern edge of the Balkan peninsula.
More from Slovenia
About Us Privacy Policy Archive Contact
© 2022 Faraway Worlds.