Tikal: the Mayan city lost in the jungle

Deep within the jungles of the Maya Biosphere Reserve lies Tikal, one of the most important cities of Mesoamerica. Explore the city and its great temples and uncover tales of human sacrifice, tribal war, and the mysterious disappearance of an entire population.

Tikal was the largest ancient civilization in Mesoamerica. Home to the Maya, it was one of the most prosperous cities of the Mayan Classic Period. In 1979 UNESCO awarded Tikal dual status under both Natural and Cultural criteria; it was one of the first sites to receive the honour.

Its grandeur and lasting sense of mystery haven’t gone unnoticed in the world of cinema either. George Lucas famously used Tikal as a filming location for the first Star Wars film back in 1977. Climb the precarious pyramids, uncover artefacts hidden within the vast jungle and watch out for native wildlife like howler monkeys and toucans. 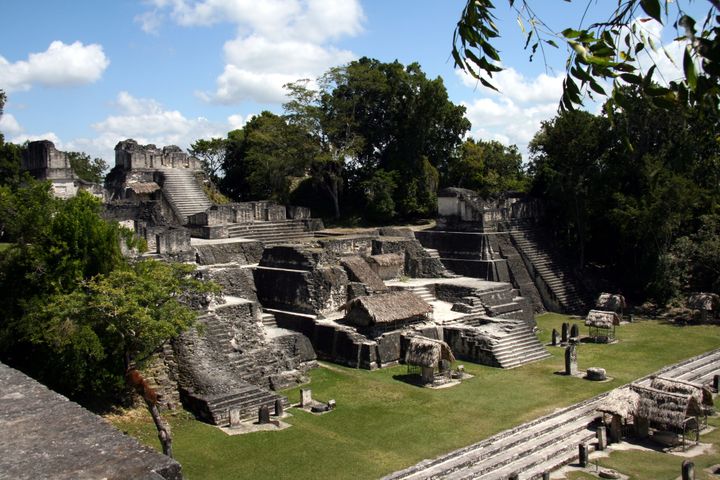 The archaeological site of Tikal

Evidence of settlement at Tikal actually dates back to 1000 BCE, but it wasn’t a thriving city until much later, around 600 CE. Covering a vast area of 575 square kilometres, Tikal was the beating heart of the Mayan empire. The city ruled most of Mesoamerica at the time, both politically and economically.

Tikal is thought to have had around 100,000 residents at its height, with remnants of the advanced civilization including a school, a library and a hospital. Although it was a modern city, sacrifice was still thought of as an honour and was commonplace in Tikal.

Art on one of the structures depicts a human sacrifice being bound to a stake and then disembowelled. This is believed to be part of the reason why Mayan civilization declined so rapidly, along with theories of war, resource depletion and natural disasters, but no archaeologists can agree on the exact reason.

Tikal's population had mysteriously disappeared completely by 900 CE, leaving the city to be reclaimed by the dense jungle. It would not be rediscovered until nearly a thousand years later. Since then, only 15 per cent of the site has been excavated.

Is Tikal worth visiting?

Tikal is without a shadow of a doubt one of the best things to see in all of Central America. The journey alone puts off many less-intrepid travellers, so you will have the chance to explore a great ancient site in relative peace and quiet.

Tikal is awe-inspiring, showcasing the might of the ancient Mayan civilization that once ruled over this part of the world. El Mundo Maya is thought to have covered around 500,000 square kilometres in total, with Tikal at the heart of it all.

The empire spread across the Mexican states of the Yucatán, Quintana Roo, Tabasco, Campeche and Chiapas, as well as Guatemala, Belize and parts of Honduras and El Salvador. 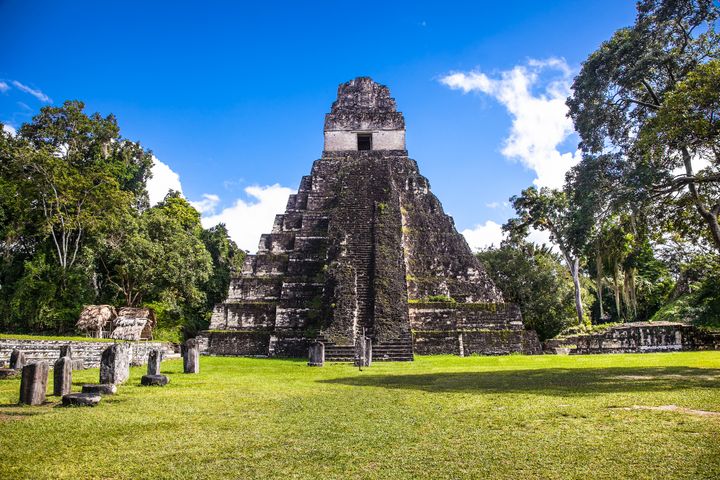 The highlights of visiting Tikal

Tikal is a vast complex that requires a whole day to be explored. Here are some of the main sights to focus on:

You can’t really miss the grand central square of the city. Surrounded by the noisy jungle, you can easily imagine the bustling life that once filled this plaza ringed by terraces, palaces and ball courts. Temple I (Temple of the Great Jaguar) and Temple II (Temple of the Mask) stand at opposite ends of the Grand Plaza.

Temple I’s pyramid has nine tiers, corresponding to the nine levels of the Mayan underworld, but climbing its steep sides has recently been banned by park authorities due to several tourists sadly falling to their deaths. Inside lies the tomb of Ah Cacau (Lord Chocolate), one of Tikal's greatest rulers.

Temple II is almost as tall as Temple I but is much safer to climb. It is named the Temple of the Masks because of the huge stone masks guarding its stairway.

From its summit, you can get aerial views of the Great Plaza and the ceremonial and residential complexes named the North Acropolis and the Central Acropolis. Graffiti found within these labyrinths of rooms suggest they may have been used for sacred rites and ceremonies as well as providing homes to the nobles of the city.

One of the many temples that have only been partially excavated, Temple III dates back to around AD 810. Just the top of the 55-metre-high summit has been cleared, leaving much to still be discovered.

A carving near the top depicts a figure in a jaguar suit that’s believed to be the ruler ‘Dark Sun’.

Temple IV is the largest pyramid of its time built anywhere in the Mayan empire; it stands at an impressive 70 metres in height. Known by Mayans as the Temple of the Two-Headed Snake, it offers outstanding views of the other temples emerging through the treetops.

This unmissable view was used as a setting in the film, Star Wars: A New Hope. Get there just as the sun comes through the morning mist for a truly unforgettable vista. 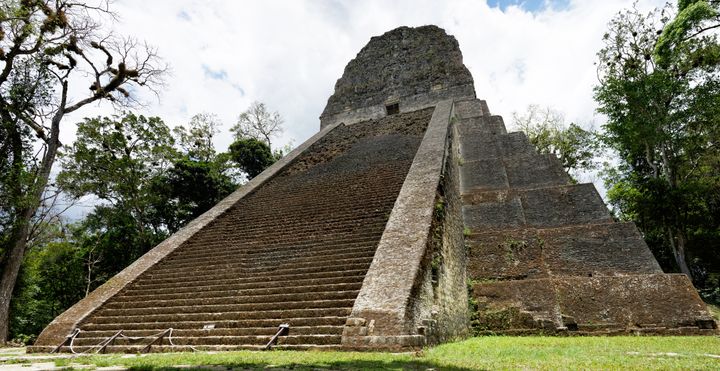 Set alone in a small clearing, Temple V sneaks up on you through a beautifully framed gap in the trees. The picture-perfect temple dates back to around 700 AD. It consists of seven stepped platforms and, unlike the other temples, has slightly rounded corners.

Recent excavation of the temple revealed Maya calendars embedded within the walls. From atop the pyramids, Maya astronomers tracked the movements of Venus and all the other visible planets, creating a calendar that is accurate to this day.

Temple VI is about a 25-minute walk from the Gran Plaza along the Calzada Méndez. Its secluded position makes it a fantastic spot for seeing wildlife. You will undoubtedly hear the howler monkeys with their menacing roars, but they are actually quite sedentary so you will have to keep a close eye out for them.

Spider monkeys are a lot more active and easier to spot, they can be seen swinging from tree to tree in search of fruit. Make sure to head around the back of Temple VI, at the rear of its 12 metre-high roof comb is a long inscription, one of the few remaining written records in Tikal.

The Lost World Pyramid is a fair distance from the more popular temples, located in the Mundo Perdido complex. It is the oldest structure in Tikal, with hidden internal pyramids that are believed to date back as far as 700 BC.

The complex comprises of 38 structures in total, with the huge pyramid as a main focal point. The buildings are intertwined with the jungle, making it all the more atmospheric. Climb to the top for a closer look at the crumbling structure as well as a great view of Temple IV. 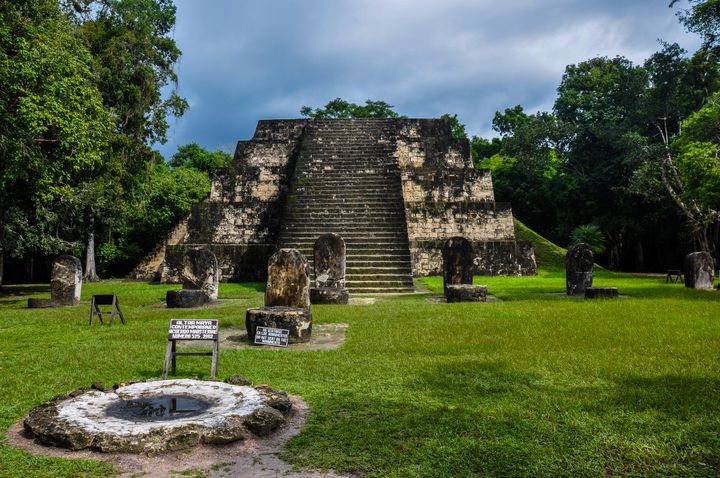 Do you need a guide for Tikal?

We didn’t get a guide and did regret our decision. Like many historic places, Mayan history can be made alive by a great local guide. There are many organised tours to Tikal which include a guided experience of the site and sunrise or sunset tours are popular.

If you choose to visit independently, there is a fantastic Tikal App that goes over a lot of the history and maps are available from the entrance. You do get to wander in your own time if you visit Tikal without a guide, and may just uncover something you weren't expecting! It’s a wonderful place to explore and I’d recommend spending as much time there as possible. 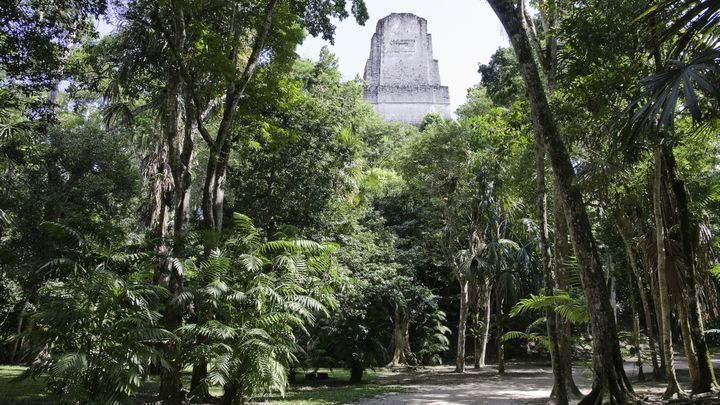 You will buy your ticket at the entrance to the national park, you will need to take your passport as they will check your name against the ticket. Food and water are expensive inside the park, and the options outside aren’t amazing so take your own.

Take sun cream, insect repellent and a good hat or headscarf for the sun. Good walking shoes are also essential.

Tikal has unfortunately lost many of the important artefacts to other museums around the world, the one at the site is a bit underwhelming, and I don’t think you would be missing anything if you skipped it (although perhaps supporting it financially would be a good idea). 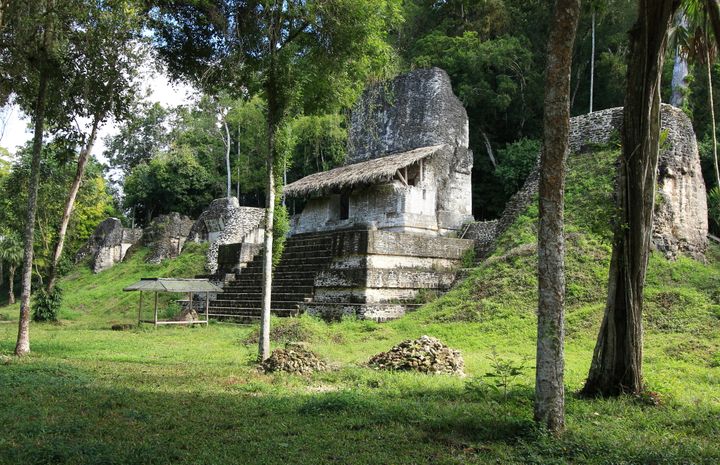 The rainy season in Guatemala runs from May to October, it isn’t the best time to visit Tikal as showers can regularly last for hours during the afternoons. The temperature can get very hot at the height of the dry season too, especially between the months of April and May.

Although it’s nowhere near as busy as other Mayan sites like Chichen Itza in Mexico, Tikal can get a bit busier with locals and international visitors around the holidays at Christmas and Easter. It’s best to go early to avoid the heat, rain or crowds at these times, dawn and dusk are also great times to spot wildlife as that’s when they are most active.

The park’s opening hours are from 6:00 AM to 5:00 PM daily, but if you’re visiting on a sunrise tour you’ll be able to enter the park at 4:00 AM. Guatemalan citizens can enter for free in the park on Sundays, so it may be a little busier. 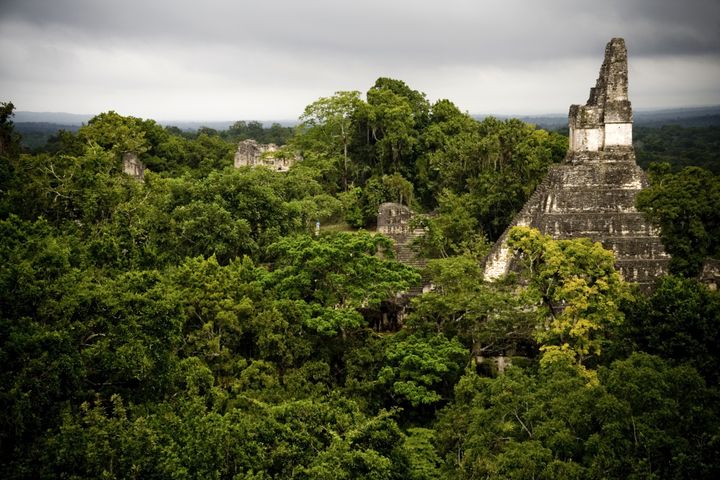 Where to stay when visiting Tikal

Many will stay in the nearby town of Flores when visiting Tikal. The small touristy island of Flores is thought to be the last Mayan city to be conquered by the Spanish.

The island is full of pretty streets, easy connections to Tikal and globally inspired restaurants. Be careful where you choose to book tours and transfers as scams are rife. A good option is Hotel Isla de Flores, with large clean rooms, great A/C and a pool. It's the perfect place to stay for a couple of nights.

If you want to get the best sights and wander around alone, stay in the jungle right next to Tika, heading to the site early in the morning before anyone else arrives. It’s also a great way to see wildlife, both at the park and surrounding the accommodation.

Hotel Jungle Lodge Tikal is perfectly located to explore Tikal from, and you can sit by the pool and watch monkeys, birds and all sorts of other wildlife. You can also combine a sunset and early morning tour with one ticket this way.

Visiting Tikal from Belize is also possible. Taking a day trip from San Ignacio is easy to do, especially if you have your own transport, as it is located just two hours away.

You can find tours in San Ignacio offering trips to Tikal. Or like us, just navigate the border yourself and get a taxi or even join a tour near the border. Guatemala's genuine hospitality and rich cultural legacy, combined with its natural beauty, make it a compelling destination for culture and travel enthusiasts.
More from Guatemala
About Us Privacy Policy Archive Contact
© 2023 Faraway Worlds.