The Actun Tunichil Muknal Cave in Belize was seen as the gateway to the underworld in Maya culture. The gods of agriculture, rain, and fertility were believed to reside deep below the earth's surface, and the closest points to them were the most sacred.

Perhaps eclipsed only by the ‘Great Blue Hole’ on the Mesoamerican Reef, Actun Tunichil Muknal (ATM) Cave is one of Belize's most popular tourist attractions. But you won’t find clicking cameras and droves of tour buses here. Known as the "Cave of the Stone Sepulcher", ATM holds many dark secrets. Skeletons of sacrificial offerings to the gods litter the cave floor.

The challenging journey to ATM involves hiking through the jungle, swimming through caves, and scrambling through tunnels to uncover the haunting remains of this curious culture. It’s a site for adventurers, explorers, and those with a fascination with the world of the Maya. 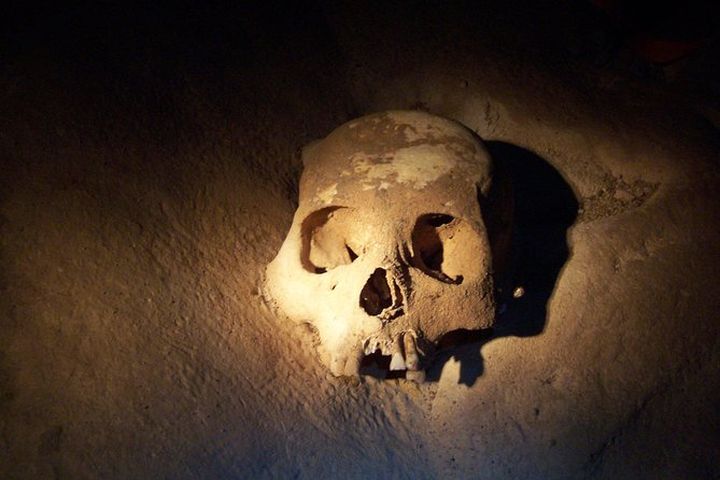 Why is the ATM Cave so important?

Between 300 and 600 CE, Mayans began exploring the cave, leaving behind pottery and basic offerings. But by 700 CE ATM Cave had become an important spiritual site as it was believed to be the door to Xibalba (the Mayan underworld). When drought, infertility and famine ravaged the population, many sacrificial ceremonies and rituals took place here.

In 1989 the cave was rediscovered and studied by archaeologists for several years, only being made open to the public in 1998. It’s widely considered an invaluable site for understanding the Maya culture.

Many records of the vast civilization were destroyed by European colonialism, but the artefacts within the cave lay hidden for centuries. In fact, the cave has been called the ‘Rosetta Stone’ of the Maya - the key to unlocking the language, customs and traditions of these mysterious people.

Since it was uncovered by modern-day explorers, over 1,400 human artefacts have been discovered at ATM. These include weapons, pottery, tools, and human remains, giving us the impression of a diverse and advanced society. 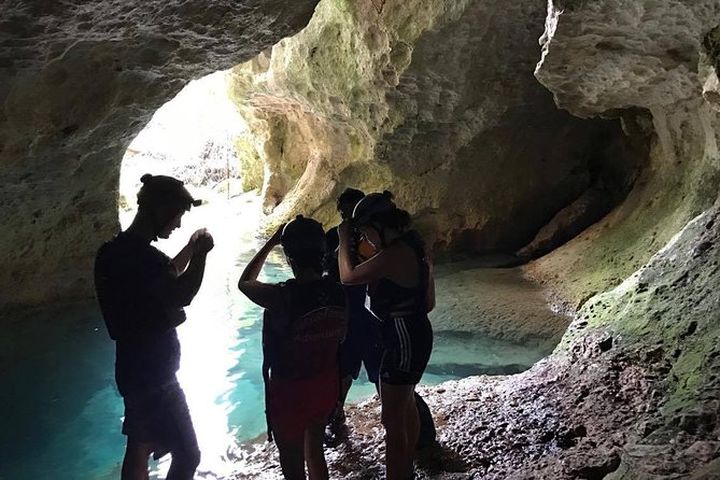 Visiting the ATM cave in Belize

The tour starts with a 45-minute trek through the humid Tapir Mountain Nature Reserve. The 6,286 acres of protected land is home to around 100 species of birds, 12 species of reptiles, and over 90 species of butterflies. But mammals like the endangered Yucatan black howler monkey and Baird’s Tapir are the reserve's most famous residents.

Sweaty from the fairly flat but fast-paced hike, we cross the Muknal River, the cold refreshing waters reaching chest high, with nothing but a small rope to hold on to. We are drenched when we arrive outside the cave and the guides kit us out with helmets and head torches. They also give us some ground rules: “Watch where you step as it might be on someone's head”! They are understandably cautious from past events involving a tourist dropping a camera and crushing a 1000-year-old skull.

There are two main sections of swimming, the longest at the entrance, and several points of wading through deep water. This cave is not for the claustrophobic. There’s a fair amount of scrambling over rocks and tight pinch-points to wriggle through. Everyone from children to pensioners is welcome on the tour, though a healthy dose of common sense is advised, and life jackets are provided for non-confident swimmers. 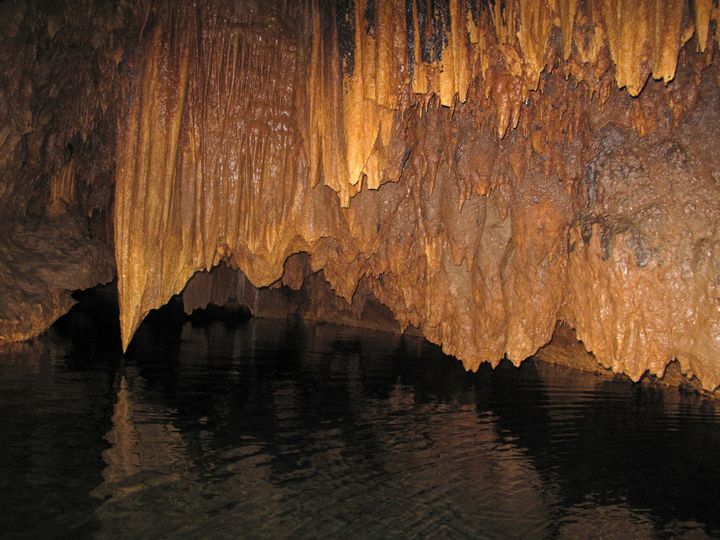 After battling through the jungle, and navigating the labyrinth of tunnels, we finally came to a 12-foot ladder. This is the accessway to the main karstic limestone chamber.

The beautiful and vast natural cave is where 14 Mayan skeletons can be found. Many of the human remains, all victims of sacrifice, were children - believed to be pure and innocent and they were of most value to the gods.

Wearing our soggy socks - to avoid damaging the site - we tiptoe past great urns and stoneware dotted with “kill holes”. These were used by shamans in the rituals of human sacrifice. The holes were created to quickly release the spirits lurking within.

The famous “monkey pot” features iconography that is typical of the sophisticated carvings of the culture at the time. Other relics include more ceramics, stoneware, carefully crafted obsidian blades, and other ritualistic tools. 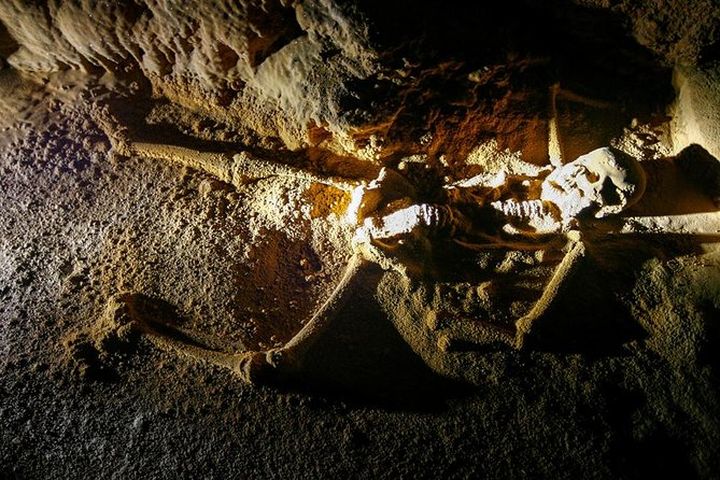 There is one skeleton in particular that draws the eye. Sparkling in the torchlight, calcified by the passage of time, is the ‘Crystal Maiden’ of ATM Cave. The bones of this violently murdered victim, thought to have been clubbed and left to die a slow death, have become infused with the glistening minerals of the cave. Slowly crystallised into a morbidly beautiful presence in this dark, unforgiving chasm.

Though initially believed to be a young adult female, closer scrutiny has revealed features that suggest they were male, some now calling the remains “The Crystal Prince”.

This discovery along with others has led archaeologists to believe that torture, such as bleeding, was also a common practice to appease the gods. 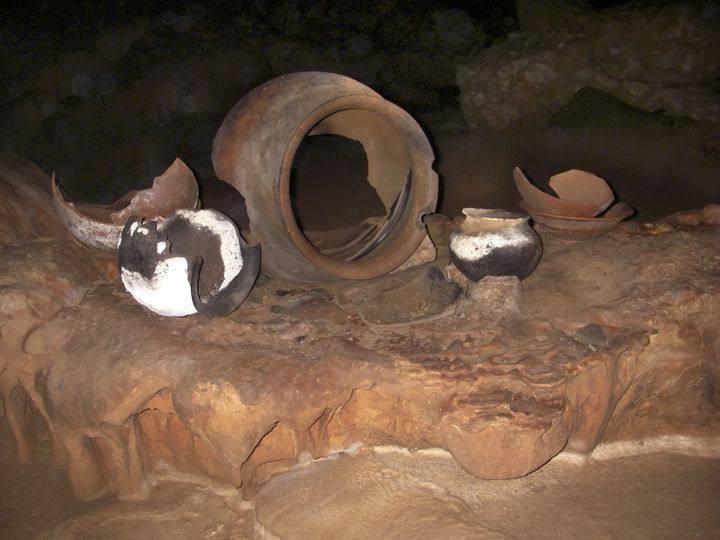 The final stop is the Stelae Chamber, containing tall stone structures. These structures are thought to tell stories of how and why important members of society and priests conducted their ceremonial practices.

It was here that Mayans carried out acts of self-flagellation with obsidian blades to offer their blood to the gods. Silhouettes of faces and animals carved into the stone by the Maya can also be found throughout the caves.

The natural formations are just as impressive to a wide-eyed explorer. Colossal icicle-shaped stalactites and stalactites have formed here over tens of thousands of years. These seemingly immortal mineral structures, only slightly smaller in 700 CE, must have seemed otherworldly to the Maya. 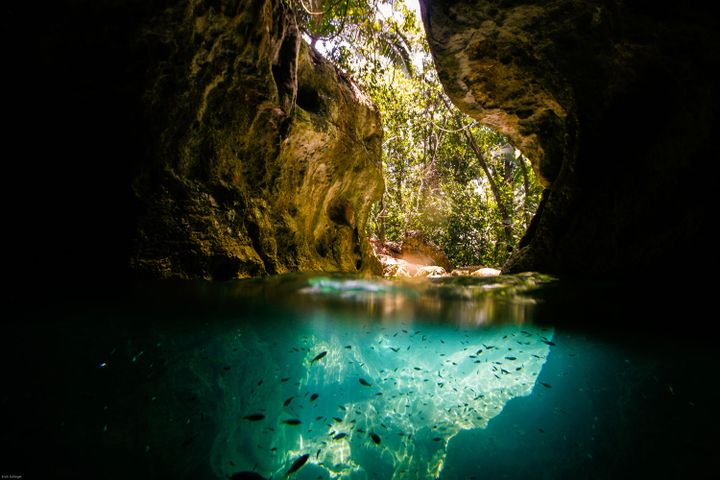 How long is the ATM cave tour in Belize?

The tour lasts for around three hours in total, including the hike in and out, plus a quick stop for snacks. Expect to spend around an hour and a half inside the cave itself. Full-day tours include transport from San Ignacio and a picnic lunch.

The cave descends into the earth for four miles, but visitors on a guided tour of ATM will only reach two-thirds of the way in. The focal point, ‘The Cathedral’ as it’s known, holds most of the artefacts and it isn’t deemed safe to venture any deeper. It’s a decision you can’t argue with when you make it that far without incident

Although it certainly wouldn’t suit everyone, this tour is fairly attainable for anyone with reasonable fitness levels. Expect some basic climbing without ropes, swimming, small ladders, and a few tight spaces. 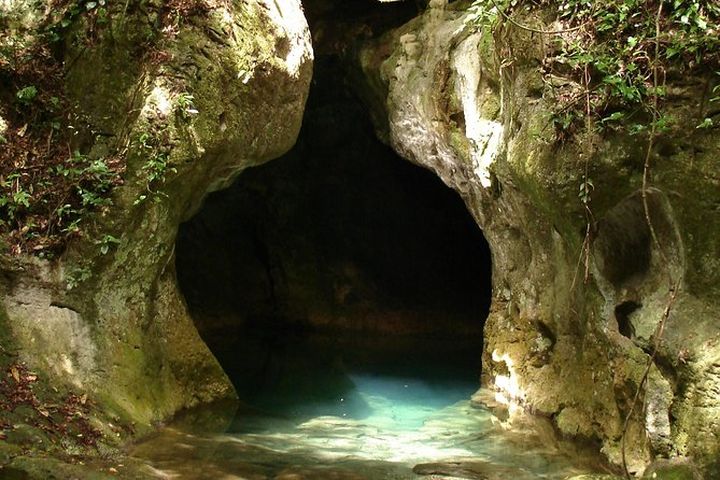 Where to stay near the ATM Cave

The Actun Tunichil Muknal Cave is in Cayo District, Belize, a short drive off of the Western Highway between the capital, Belmopan, and San Ignacio. By far the most well-known attraction in the area, you can pick up a tour to the ATM Cave from pretty much anywhere, but San Ignacio has the most to offer in the way of accommodation and restaurants.

Just 45 minutes from ATM, San Ignacio is the gateway to many of Belize's Mayan attractions including Cahal Pech, Caracol and Xunantunich. It’s also a great base to take a day trip to Tikal in Guatemala.

San Ignacio is a friendly sort of town, where everyone will stop to say hello. For breakfast, head to Pop's Restaurant for the best Fry Jacks in town, peruse the San Ignacio Market for local delights, and then for dinner try Thai noodles at The Guava Limb Restaurant - renowned for their top-class international cuisine.

Stay at the Ka'ana Resort & Spa for a little slice of paradise, all rooms are set in small houses overlooking the hotel's tropical gardens and infinity pools. 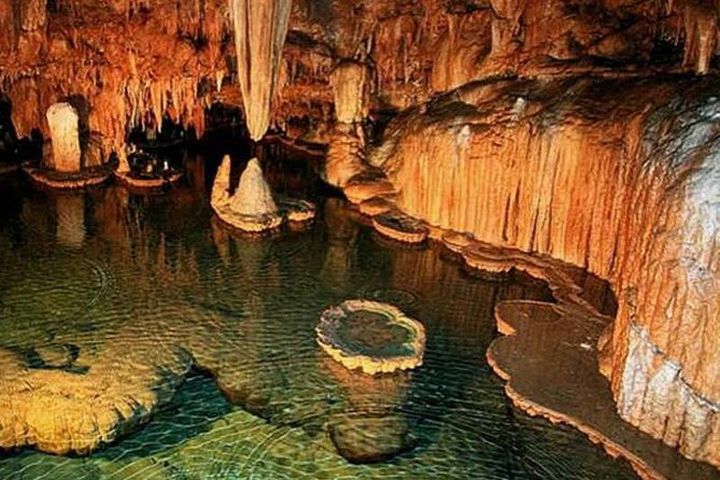 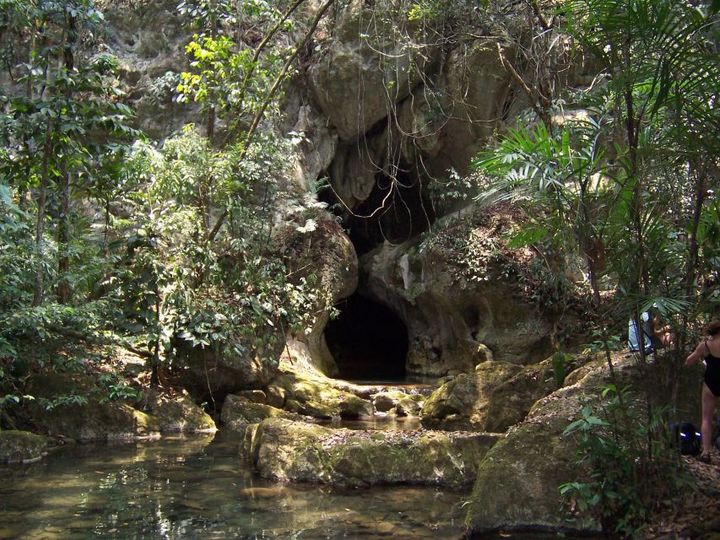 After you visit ATM, take a trip to one of the many nearby Maya cities and temples; Cahal Pech, Caracol, Xunatunich and Tikal are all a short drive away. You can also see native, orphaned & rehabilitated animals in their natural habitats at the Belize Zoo, learn about the Garifuna culture at Hopkins, and spot wild jaguars at Cockscomb Basin Forest Reserve.

Or for some quality island time, head to Caye Caulker - home of the ‘go slow’ way of life. From here you can snorkel and dive on the Mesoamerican Reef, the second-largest barrier reef in the world. Top spots include the Hol Chan Marine Reserve home to manatees and nurse sharks, and the Great Blue Hole - a 300-metre sapphire sinkhole declared both a World Heritage Site and one of the top 10 diving sites on the planet. 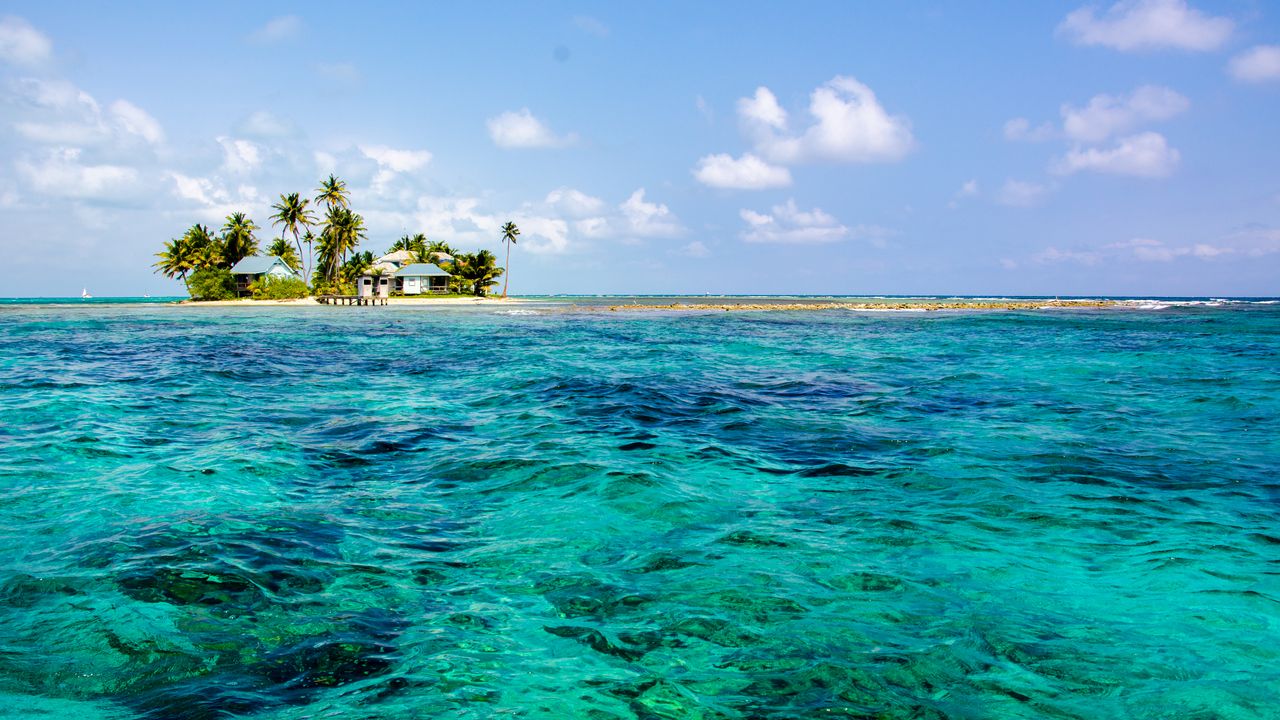