We arrived in Rarotonga at midnight, to warm humidity and a man singing to the tourists in the airports. Fragrant leis were put around our necks as we cleared customs and with the heady scents of hibiscus and frangipanis welcomed us to the Cook Islands.

Leaving the airport, we were hustled onto a bus, which dropped us at our resort. We wandered up to our room, where we found there was a fruit platter, a bottle of sparkling wine and a large balcony overlooking the ocean waiting for us. So, we sat outside, sipping bubbly, nibbling exotic fruit and listening to the waves. Just what you want your first night on a tropical island to be.

The next day, we wandered around Rarotonga, staring at the lovely beach and palm trees. I had just mentioned that one of the islands had no dogs – I couldn’t remember which, but maybe it was Rarotonga – when the first dog started following us along the beach.

Soon enough, we picked up another, then another, and this continued until there were about six dogs walking with us. They were friendly but we became slightly nervous as more dogs joined us, each wanting a little attention. Eventually, we met another pack of dogs, waiting by some invisible line in the sand. Barking and jumping ensued, and we took advantage of the frenzy to escape from them all, walking along the road back to our hotel.

We hired a car and drive around the island, heading through the villages, up the mountain and to beautiful Muri Lagoon. Driving around the island took about an hour. We had dinner at different resorts, lunch at restaurants by the harbour and slowly sank into island life.

A few drinks after dinner somehow turned into a fishbowl cocktail, so we were both feeling a bit worse for wear when we staggered into the airport the next day. The plane to Aitutaki was small – we could see the pilots from our seats at the front. One was reading a paper. It was also loud – very loud – which I could see wasn’t doing much for my new husband’s peace of mind. I managed to drift in and out of sleep, which he stared fixedly in front of him, with a pained look on his face.

Our first glimpse of Aitutaki was from the air. Aitutaki is beautiful – my first impression when the sun came out was that it was so beautiful it hurt my eyes. Within half an hour of arriving, I was on a lounger perched on the white sand, reading a book and sipping a pina colada, with the amazing lagoon in front of me.

When I finally went into the water, I discovered it had been dredged in front of the resort, so we could swim, then became very shallow, very quickly – lying on the sand in the middle of the lagoon was a luxury all by itself.

Again, we drove around the island - it took just 35 minutes here – stopping at resorts and remote beaches. We talked with a bone fisherman who was staying at our resort; he had come from the US to spend two weeks on the island just to catch bone fish in his big boots.

Our breakfasts were exotic fruits – I tasted star fruit and dragon fruit for the first time, both delicious – and I tried vodka pina coladas at various bars around Aitutaki (the island ran out of rum for a few days while we were there). We met other tourists and had a seafood dinner in a small restaurant with a sandy floor. Over the next few days, we tried the food at various places on the island, and that’s the only thing we would have improved.

The highlight of our stay was the lagoon cruise. It was a gorgeous day and we snorkelled with the fishes, relaxed in the warm water on a desert island, wandered through some bush with the birds, and had a beautiful lunch at One Foot Island. We even saw turtles swimming from the boat. It was like living in a postcard.

The scenery was magical, even when it was wet – we went during the summer season, and it rained a few times, although we had a couple of stunning days too. It was beyond relaxing. I wandered around in a permanently dreamlike state, feeling unbelievably far away from real life (even if there were occasional little reminders of Auckland).

This pretty much sums up the rest of our time in Aitutaki. Assorted food, too many cocktails (good coffee was hard to find) and lots of time spent on the perfect white sand. It’s hard to think of a more perfect honeymoon destination than Aitutaki. We went back to Rarotonga for a day or two before flying back to Auckland and, after Aitutaki, it just wasn’t the same.

We stayed at the Edgewater Resort on Rarotonga, but would recommend nearby Sunset Resort or Little Polynesian Resort instead. On Aitutaki, we stayed at Aitutaki Village.

Where to go in the Cook Islands 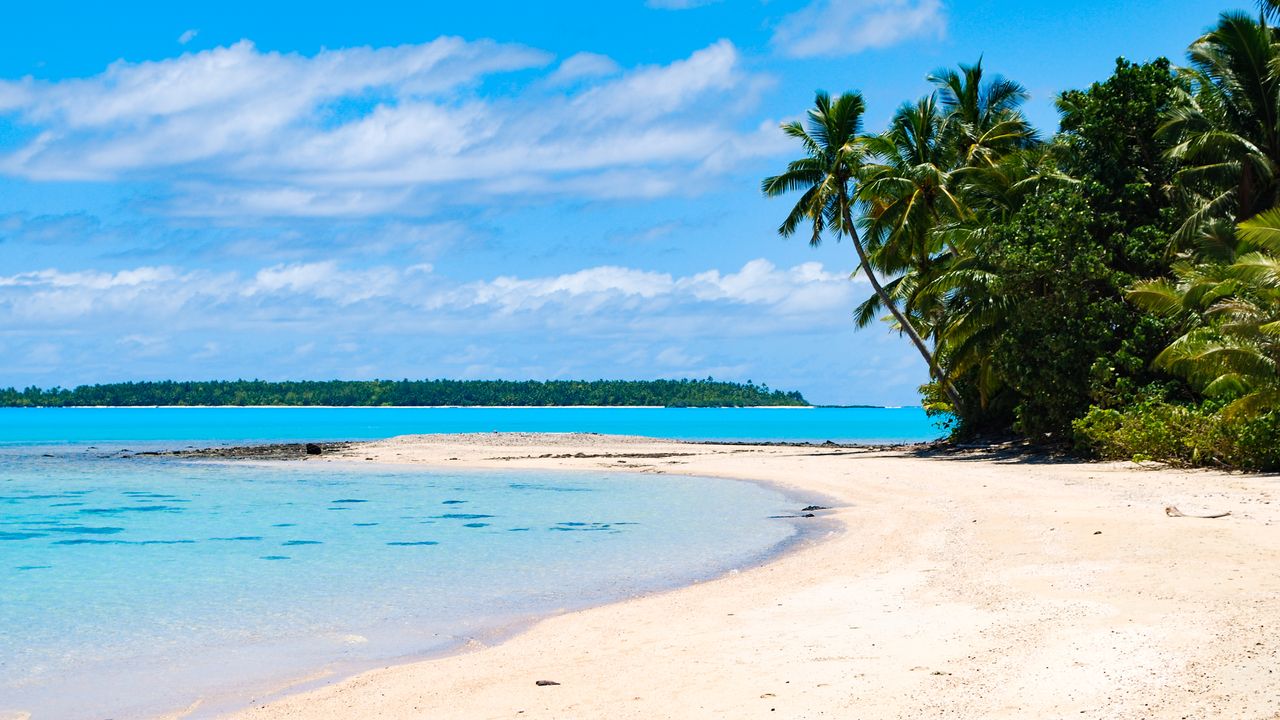 Scattered through the South Pacific Ocean, these tropical islands are the perfect places to visit when you just need a break from the world.
More from The Cook Islands
About Us Privacy Policy Archive Contact
© 2022 Faraway Worlds.