The road in front of us abruptly disappeared into sand dunes. Looking out of the window, we could see it continue a few metres in the distance, parallel to the current road. Unfazed, my colleague swung the wheel, and the jeep bounced over the dunes, back onto the road. There were orange cones in the distance.

“They’re always moving the roads,” she said, in explanation. Dust flew around us, it was forty degrees outside, and we’d lost the city in the desert, but something in me had already fallen in love with Qatar.

From air-conditioned cars, we’d momentarily brave the thick, hot air before finding ourselves indoors, shivering from the air-conditioning. I watched women walk past, more covered than in the UAE, with beautiful, glittery, strappy sandals peeking out beneath their skirts.

Walking through the souq at night was magical, and I passed bags of spices and grains, shining coffee sets and shisha pipes. Women shopped in small groups, a man behind them carrying their purchases, and men sat in rows in cafes, talking and smoking. Occasionally, I was stopped by one of the women and spoken to in Arabic. When I couldn't reply, I got soft smiles and a pat on the hand, and once a woman pressed a book on Islam into my hand. Later, we had dinner on a rooftop restaurant, watching the sun fade over Doha, the night air warm with just a hint of the desert.

I discovered fresh dates, homemade falafel and tea, learning to shake my cup to show I had enough. I remembered to eat only with my right hand, and giggled with the Qatari women when they quickly threw on their scarves when a man unexpectedly came near.

I learnt to stay seated when a man came to greet us and struggled to stay relatively quiet throughout meetings. And always, I was asked, "Are you from Jordan or Palestine?" Then people would shake their heads when they heard I was a South African based in New Zealand, and not Arab after all.

I sat in a Bedouin tent in a school, and listened to stories about camel races and weekend 4WD trips to the dunes in the nearby desert. Throughout the day came the call to prayer, and the minarets of mosques were visible across the city skyline.

On the last day, just before we left for Abu Dhabi, came the highlight of the trip, when I finally visited the Museum of Islamic Art. The museum was overlooking the water, in a building designed to emulate a woman peering out through her niqab. I had wanted to go inside from the moment I first saw it, but hadn’t thought we’d have the time.

The interior was beautiful, with interesting architecture and geometrically designed lighting. There was a black pearl exhibition when we visited, which took up most of our time, but gave us an interesting insight into pearl diving in the Gulf and its importance to the people there.

Back outside the heat hit us again, but it was later in the afternoon and almost bearable. The tinkling fountains and a gorgeous view kept us there for a while. We looked back across the water to Doha through arched windows. We were reluctant to leave, but it really was the perfect spot to say our goodbyes. 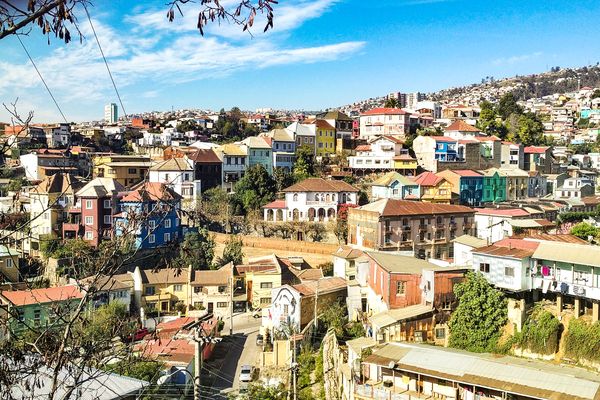 Colours and street art in Valparaiso