There are many stunning waterfalls in Croatia and some of the loveliest are the Skradinski Buk waterfalls in Krka National Park. Easily accessible from the Dalmatian coast, Krka is an enchanting spot and much less crowded than the famous Plitvice Lakes National Park further inland.

The Krka River winds its way inland through the national park, bordered by thick forest scattered with winding paths. You can spend as much time as you like wandering through the trails, which are usually shaded, with beautiful river views and dotted with the occasional waterfall. There is even a tiny isle at one point in the river, home to a medieval monastery which rises from the water like an vision from a fairytale.

How to get to Krka National Park

If you are staying in one of the coastal towns, you can also get to Krka National Park by public transport. There are buses from Zadar and Split to the small town of Skradin, which is near the park. From there, you can take a ferry to the park (the entry fee to the park is included in the ferry ticket). Just be sure to get the early bus so you have as much time to enjoy the national park as possible.

Otherwise, the quickest way to get to Krka National Park is by car. It takes about an hour to drive there from the coastal towns of Zadar or Split and it's a lovely drive. Krka National Park is about three hours' drive from Zagreb and around three and a half hours from Dubrovnik. Just be aware that you'll need to buy an entrance ticket to the park if you are planning to drive. You can do this when you get there or book in advance.

You can also do organised tours to Krka National Park from Split or Zadar. 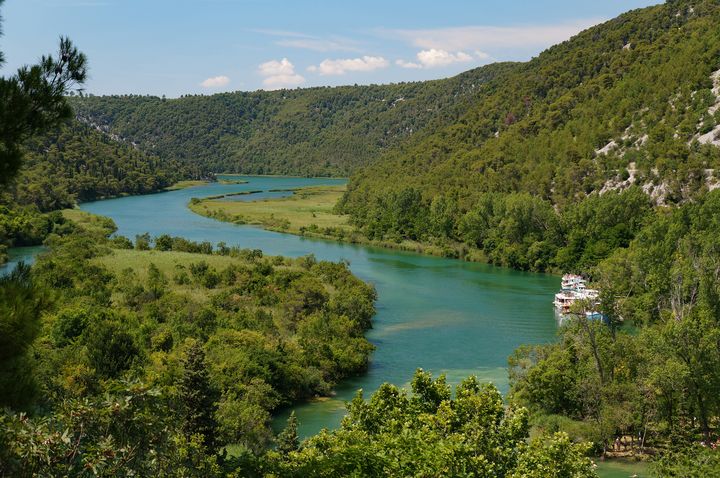 Boat ride from Skradin to the Krka National Park

The boat ride between Skradin and Krka National Park meanders down the Krka River through lush greenery. It's a scenic trip which takes around 25 minutes. The boat runs between April and October and the entry fee into the national park is included in the ticket cost.

The best time to see the waterfalls at Krka National Park is in autumn and winter. There is more rain this time of year and the waterfalls are at their most impressive. There are still many dry days this time of year and the cooler temperature makes it a good time for hiking. There are far fewer visitors to the park at this time of the year, and the quiet adds to the magical atmosphere. Krka National Park is also especially stunning in the snow.

Saying that, if you are in Croatia in the summer (the best time to enjoy the beautiful Croatian coast), it's still worth visiting Krka. it will be busier but the waterfalls are still very impressive and you have the added bonus of being able to swim in the river. 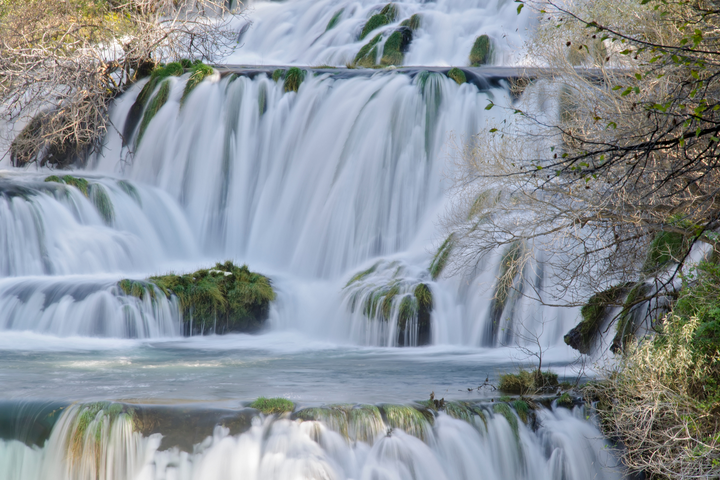 Things to do in Krka National Park

There's a huge amount to do in Krka National Park, depending on how much time you have to spend at the park and whether you are driving or relying on public transport. Here are a few options to choose from.

The undisputed major attraction of Krka National Park is the Skradinski buk falls, a collection of 17 cascading waterfalls with a total drop of 45m. Shaded walking tracks take you through between the enchanting waterfalls. The loop is under 2km and easily accessible, so it can get crowded in summer. Visit in the morning when you first arrive to see the waterfalls in relative solitude.

Visovac is a lovely and otherworldly part of Krka National Park. The tiny island seems to float on the river, the bell tower of the monastery reaching above the treeline. As a result, Visovac is perhaps best appreciated from afar and there is a viewpoint at the top of the Visovac cliff, by the monument to Petar Svačić, the last king of Croatia.

It's also possible to visit the island by a short boat ride from Stinice or Remetic, both accessible by boat from Skadinski buk. You can also get a boat tour directly to Visovac from Skradinski buk (some include Roški slap as well), however, you won't be able to stop at the viewpoint to see the island from above. There are more cascading waterfalls at Roški slap, the layered tumbling falls known locally as the "necklace". The main falls aren't quite as majestic as the ones at Skradinski buk, however, they are still impressive and it is a lovely part of the park. There are a number of restored watermills at Roški slap (see below) and there is an ancient Roman road over the falls. You can also start a few good hikes from here.

You can reach Roški slap either by car or by boat from Skradinski buk, either direct or via Visovac. You can also hike between Visovac and Roški slap - it's a bit strenous in places but the views are incredible!

Six of the seven waterfalls in the Krka National Park have watermills and water columns, which were used until the late 1970s. During the turbulent history of the area, these watermills were often destroyed and rebuilt, and the present buildings were built at the end of the 19th century.

Several of the watermills at Skradinski buk waterfall have been restored, and now function as a museum and visitor center. The so-called “friars’ watermill”, at the Franciscan monastery at Visovac, and the watermill of the Šoster family from Miljevci also been resetored at Roški slap waterfall. In the Šoster family watermill, the house has been equipped with all the traditional furniture and accessories, giving visitors a peek into the past. 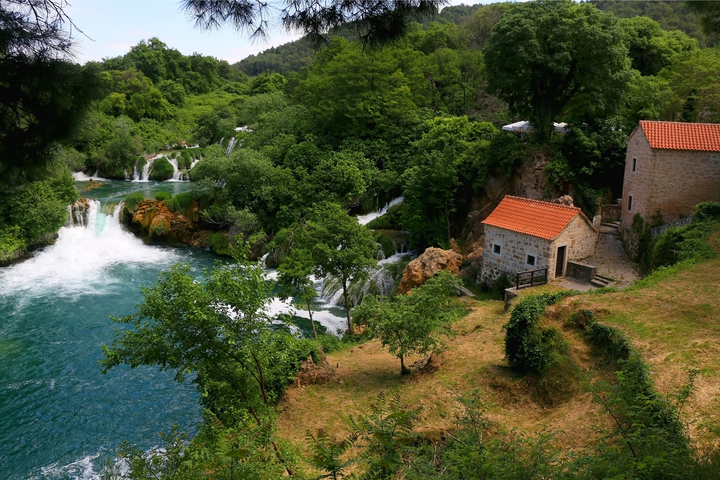 Arguably the most beautiful waterfall on the Krka River, Manojlovacki slap is around an hour's drive from the Skradinski buk falls. There's no public transport between the two, so it's only really accessible if you're driving yourself or interested in a full-day hike - as a result, many people unfortunately miss out on seeing this waterfall.

Manojlovacki slap is the tallest waterfall in the park, surrounded by forest and a canyon marked with small caves. This is one of the most secluded parts of Krka National Park and it's a magical location. The waterfall is well worth visiting if you have the time, just be aware that the volume of water can dwindle in the summer months.

While you're in the area, you can also take a peek at the nearby Roman ruins of Burnum. There's an impressive amphitheatre and the ruins of the ancient military site.

There are numerous trails through the park, and, if you enjoy hiking, it's worth putting aside some time to enjoy some of them. The route through the Skradinski buk waterfalls is less than 2km, so you may want to go elsewhere if you want something a bit more challenging. Try the necklace loop around the waterfalls at Roški slap, or explore the areas around Manojlovacki slap.

If you're lucky, you may even spot some local wildlife - there are wolves, terrapins and European otters, as well as 20 species of fish and over 200 different bird species. Keep an eye out for the Balkan whip snake and the venomous nose-horned viper, which can also be found in the park, but are generally rather shy. 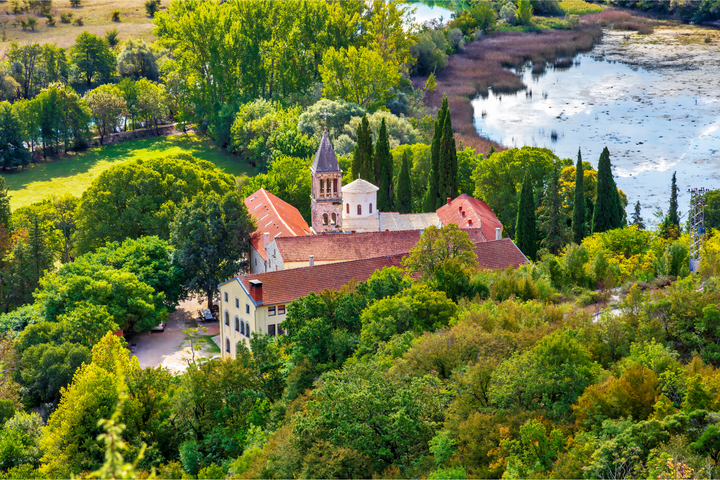 Housed in a beautiful, medieval building on the banks of the Krka River, the Krka Monastery is an important Orthodox site and well worth visiting. You can take a guided tour through the church and the Roman catacombs and the grounds are also lovely.

It's easiest to drive to the monastery, otherwise you can take a boat trip from Roški slap between April and October. The round trip takes around two and a half hours.

Krka National Park is the only national park in Croatia where swimming is allowed. Until 2021, visitors were even able to swim in the large pool at the base of the Sradinski Buk waterfalls - a magical, if rather cold, experience. Now, swimming near the famous waterfalls is prohibited, due to ecological concerns.

However, there are other areas of the park where you can still swim - Stinice, Remetić - Pisak, and downstream of the Roška slap. These spots aren't near the main Skradinski Buk track, so you'll have to drive or take a boat to get there. Just keep in mind that the water can be cold and there are some sharp rocks, so you may want to wear water shoes.

Memorable experiences on the Dalmatian Coast 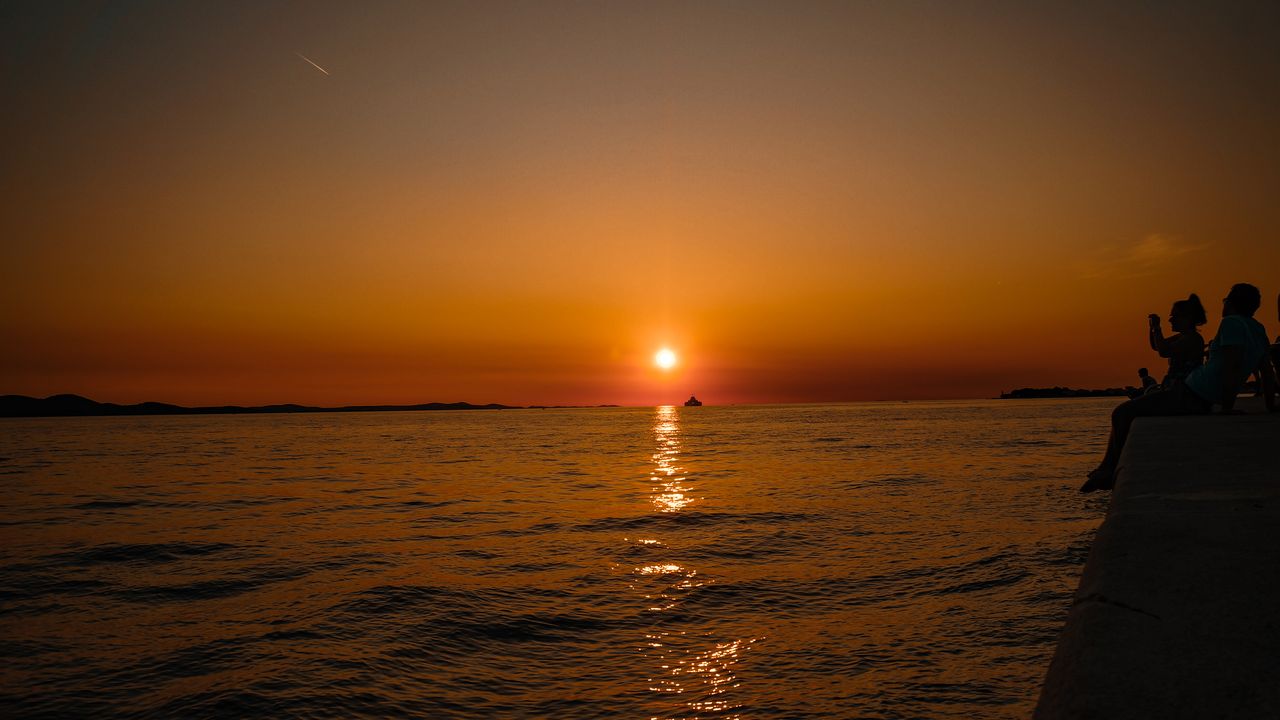 Croatia is a beautiful country in the Balkan peninsula in southeastern Europe. With a coastline that stretches down along the Adriatic Sea, over 1,200 islands and several stunning waterfalls, Croatia is known for its natural features and charming coastal towns.
More from Croatia
About Us Privacy Policy Archive Contact
© 2023 Faraway Worlds.