Where to stay in Lisbon

Famous for its sunny weather, beautiful architecture, rich history, and stunning views, Lisbon is one of the most beautiful capital cities in Europe. It is also one of the oldest. At over 2700 years old, Lisbon is the oldest city in Western Europe, predating other capitals such as Paris, London, and even Rome.

Today, this vibrant city is a popular tourist destination, home to delicious cuisine, beautiful attractions, fado music, and amiable locals. It is also a great jumping-off point to explore everything that Portugal offers—and believe us, there is so much to do in this little country.

Like any capital city, you have many options of areas to stay in the city - twenty-four, in fact. That is the number of freguesias or neighbourhoods located within Lisbon, all with their own unique charm and offering. One of the best things about visiting Lisbon is that there is something for everyone, whether you are looking to be right in the middle of the action or searching for peace and quiet. Here are my recommendations for which areas to stay in when you visit Lisbon. 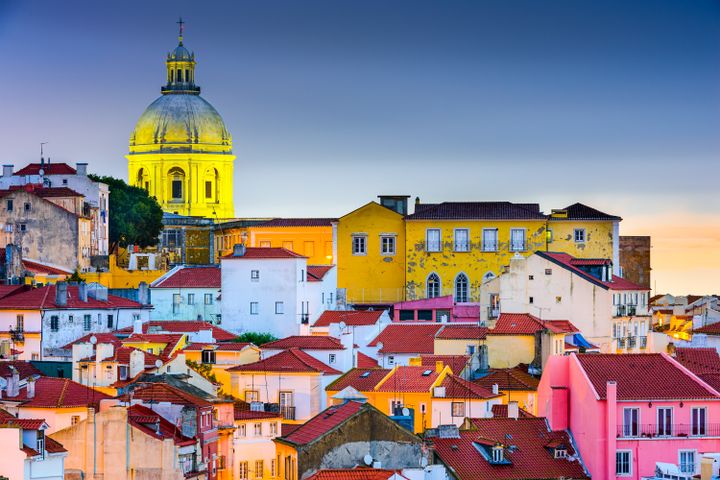 Best area to stay in Lisbon for first-time visitors 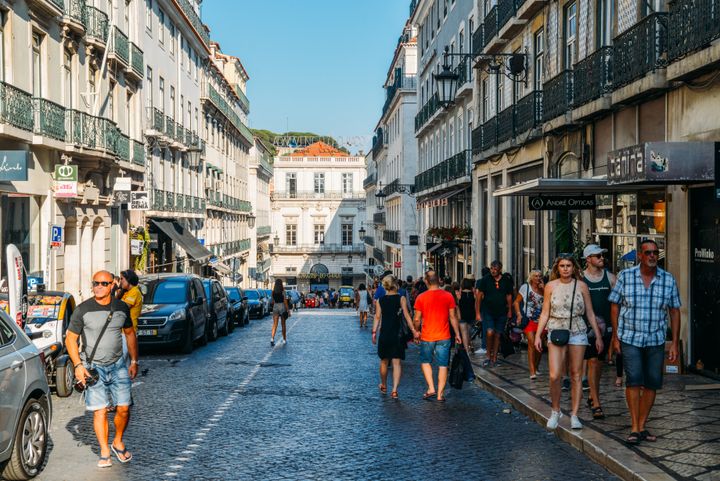 Chiado is one of the most central and, as a result, busiest neighborhoods in Lisbon. So if you are looking for peace and quiet, this isn't the place for you. However, if you want to be right where the action is, then Chiado is the perfect spot.

In Chiado, travelers can walk to most of the tourist attractions. It is also home to classic theaters, sophisticated bars, Michelin-Starred restaurants, and a large variety of shops for any type of budget.

Things to do in Chiado:

Rua Garett is the main street of Chiado, with the Aramazéns do Chiado mall at one end and the famous A Brasileira café (one of the three oldest cafés in Lisbon) at the other. While you’re there, also visit the TOUS store, a jewellery shop originally called Ourivesaria Miranda e Filhos which opened in 1914. TOUS acquired the shop in 2012 and refurbished the store, making sure to preserve its unique style and architecture. Finally, visit one of the first and most beautiful elevators in all of Europe, located on the 4th floor of the United Colors of Benetton, which was previously the Ramiro Leão department store.

Chiado is also home to attractions like the Convento do Carmo, a 14th-century church, the Praça Luís de Camõs, a historic square and popular meeting spot, particularly in the evening. The Bertrand Bookstore, the world's oldest bookstore, and the famous Elevador de Santa Justa are also in the area

Quick tip: we recommend skipping the hours-long wait to ride up the elevator and instead head on over to Topo Chiado to enjoy the view along with a drink or two. Or you can go to the Terraços do Carmo, which is next to the restaurant.

Where to eat in Chiado

Chiado is home to several great restaurants that cater to every type of diet and taste. Some that we recommend include The Green Affair (vegan), Bao Bao (Pan-Asian), Organi Chiado (vegetarian and vegan), Ao 26 (vegan), Sea Me (seafood), and O Portugues Chiado. For a Michelin-Star experience, go to Belcanto, Alma, or Epur. There is also a small courtyard off the Rua Garrett with several restaurants.

Best area to stay in Lisbon for a city break 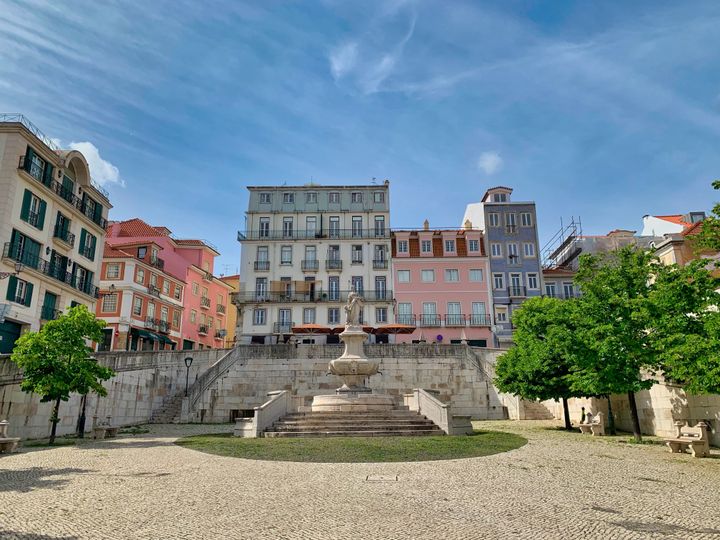 If you didn't already know, Estrela means star in English. This neighborhood gets its name from the five streets connecting the main square right in front of the beautiful Basilica da Estrela.

Estrela is known as the design district and is a charming area home to many beautiful green spaces. There are no metro stations in the area, however, some buses and trams pass through the district. One of the great things about Estrela is that it isn't as hilly as many other areas, making it the perfect place to explore on foot. This neighbourhood is also a great choice if you are traveling with children.

Things to do in Estrela

One of the main tourist focal points in Estrela is the Basilica da Estrela. Built at the end of the 18th century, travelers can head up to the roof-top to enjoy a beautiful view of Lisbon, the Sao Jorge Castle, and the April 25 bridge.

The district is also home to three different parks, all with their unique charms. The Jardim de Estrela is a great place to have a picnic. It also has a kiosk where you can enjoy a cold beer after a long day of exploring and a resident peacock who roams the grounds freely during the day.

Another beautiful garden to visit is the Tapada das Necessidades, which was once used by monarchs as their hunting grounds. Last is the Jardim 9 de Abril located right beside the Ancient Art Museum. The garden offers another beautiful view of the Tagus River.

Where to eat in Estrela

Estrela is also home to several restaurants, including Kefi Greek Bistro, Avocado House, Flor da Estrela, and Café São Bento, which serves one of the best steaks in Lisbon. After lunch or dinner, head over to Unico Gelato, whose recipes for authentic handmade gelato come straight from Bologna, Italy.

Best area to stay in Lisbon for families 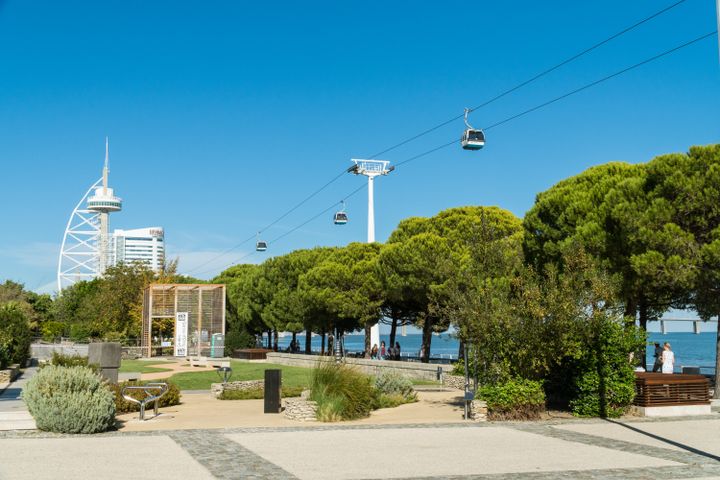 Located on a strip of land approximately 5km long by the river Tagus, this refurbished up-and-coming Lisbon neighborhood is famous for its green spaces, gorgeous architecture, and the Oceanarium.

The Parque das Nações neighborhood is one of the most modern districts in Lisbon. The locals still refer to the area as "Expo" because it was chosen to host the last World Fair of the 20th century. Many of the structures in this area were built for the expo. However, there has been a lot of development in the area, which has followed the expo's oceanic theme. For example, the São Gabriel and São Rafael twin towers resemble the Vasco de Gama ships.

The area is also well connected with the metro, train station, and bus stops. It is also a stop on most of the hop-on-hop-off bus tours.

Things to do in Parque das Nações

One of the best features of this neighborhood is the waterfront promenade and the green spaces surrounding it. The promenade has a beautiful view of the longest bridge in Europe, the Vasco da Gama bridge, and is filled with statues from both local and international artists. A unique way of experiencing the boardwalk is to take the cable car from one end to another. On your way back, stop at one of the many restaurants along the promenade.

Other unique things to explore in the area include Parque de Tejo, the Vasco da Gama Tower, which is also home to the Michelin-Star Restaurant Fifty Seconds, the Oriente Station, and Colombo, one of the biggest malls in Lisbon.

Best area to stay in Lisbon for couples 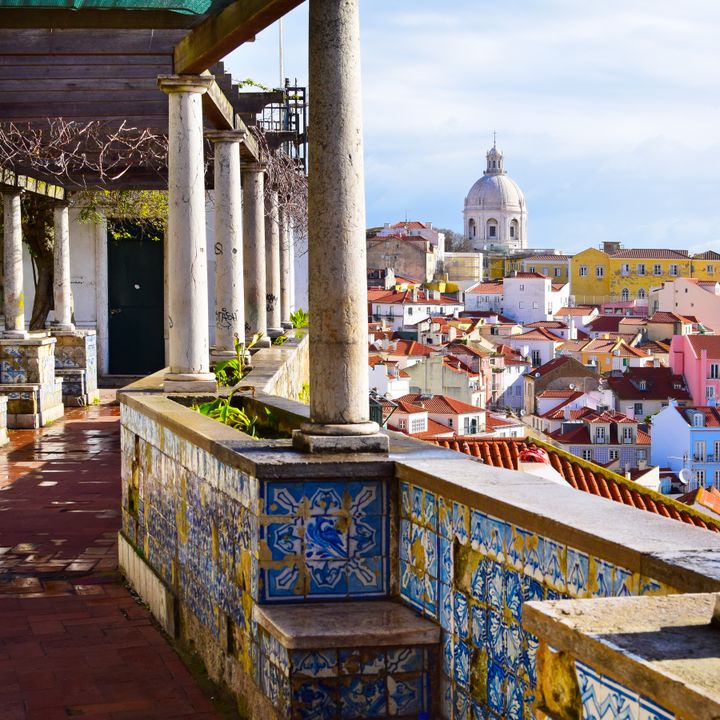 Alfama is one of Lisbon's oldest neighbourhoods and is home to many miradouros (viewpoints), boutique hotels, and shops. It is the birthplace of Fado or traditional Portuguese music. This area dates back to around 1150 and was one of the few neighbourhoods in Lisbon to survive the 1755 earthquake.

Alfama is one of the steeper hilly regions of Lisbon, so be prepared to walk through a maze of narrow lanes that incline sharply. But one of the best ways to explore this area is by foot. One of the more popular walking routes is from Baixa to the Miradouro de Santa Luzia. And if you are feeling a little tired, you can also opt to explore the neighborhood by tuk-tuk.

Things to do in Alfama

Alfama is famous for Fado and is home to the Fado Museum. Fado was born on the Lisbon streets, and in 2011 it was added to the World Heritage List by UNESCO. If you want to experience Fado yourself, make sure to leisurely explore the streets of Alfama as quite often you'll hear the music echoing from open windows.

There is also a tribute to fado singer Amália Rodrigues cobblestoned on the wall on Rua de São Tomé. Finally, travelers can also head to A Travessa do Fado, a Portuguese restaurant beside the museum, which hosts live Fado performances.

The neighborhood is the perfect place to wander, explore, and get lost in. The area is home to gorgeous pastel and tile-covered buildings, small shops hidden in narrow alleys, and friendly local business owners beckoning you to come in and enjoy some Portuguese treats and liqueurs. It is also home to the São Jorge Castle and one of the oldest churches in Lisbon, the Sé Cathedral.

If you are in the neighborhood on a Tuesday or Saturday, you can also head over to the flea market or Feira da Ladra.

Best area to stay in Lisbon for a local vibe 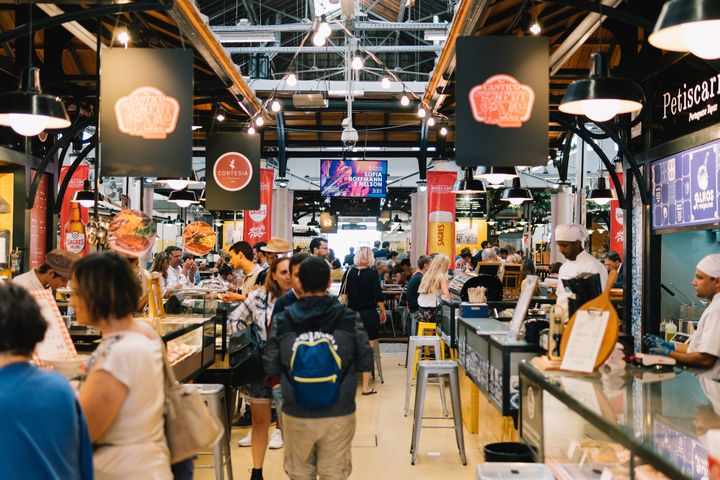 Campo de Ourique is one of those neighborhoods that has largely been untouched by tourism. It is a residential area, popular among both Portuguese locals and expats. The main reasons why tourists tend to overlook this neighborhood is because it isn't well connected by transportation, and it doesn't offer too many tourist attractions.

However, Campo de Ourique feels like a suburban residential area, disconnected from the city yet still located within the city. As with many neighborhoods in Lisbon, Campo de Ourique is still close to many major attractions; it is within walking distance of the Jardim de Estrela (5-10 minutes) and less than 4km from neighborhoods like Chiado or the Time Out Market - and better yet, everything is downhill!

This brings us to one of the major cons of this area. Campo de Ourique is located at the top of a hill, so although you will walk down to get to the tourist areas, prepare for a steep climb back up. Or take a tuk-tuk/UBER ride if you aren't up for it.

Where to eat in Campo de Ourique

The main attractions in the area are restaurants and the Campo de Ourique Market, which has been open since 1934. Here you can find vegetables, fruits, shops, and a vast variety of food stalls—think of it as a less crowded mini Time-Out market.

Campo de Ourique is also the perfect neighborhood if you are vegan as it has a lot of vegan options, a Vegan Nata spot, and two health food stores, Celeiro and Go Natural.

If you are looking for a quiet evening, grab a drink and a burger at the Jardim da Parede. Other restaurant options include Memória (Italian), Brasileiros (Brazilian), Bichomau, Amélia (for brunch) and Pastelaria Aloma for a delicious pastel de nata.

Ericeira: know before you go

Yvonne loves writing, the ocean, and travel, so it comes as no surprise that her two main passion projects revolve around these topics. She the founder of Now in Rio Swim, a sustainable swimwear company inspired by the magic of Rio de Janeiro, and Now in Portugal, a website dedicated to providing unique stories and travel tips about the country she now calls home, Portugal. 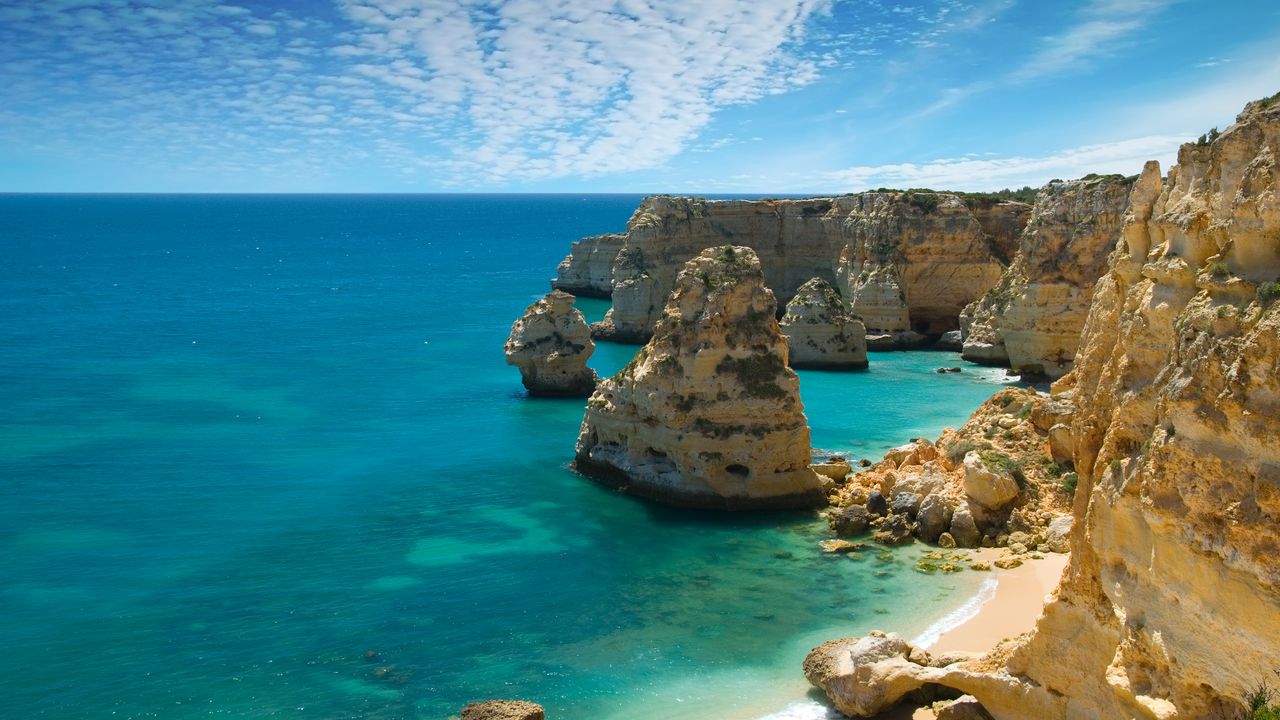