We have all heard of elegant bridges spanning large distances and heralded as feats of engineering. But have you heard of a natural bridge made of roots? The mountainous state of Meghalaya in northeast India has over 100 living root bridges spread across several villages.

The living root bridges were built by tribesmen hundreds of years ago to facilitate travel across raised banks of fast-flowing streams in the lower slopes of Khasi and Jaintia Hills in Meghalaya. These bridges are still standing and they remain important to local communities today. Here's what you need to know about visiting living root bridges in India. 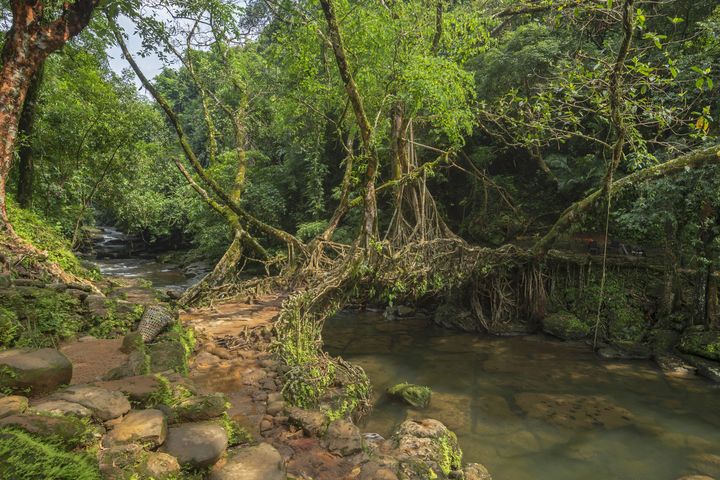 The importance of living root bridges

Living root bridges are the only way for peope living in remote villages in Meghalaya to reach the bigger towns to sell produce, send children to school, or get to a doctor. Most bridges are strong enough to hold 40-50 people at a time, however they are for pedestrians only.

Building root bridges is a tradition that is passed through generations in the tribes of Meghalaya. Living root bridges are grown in an intimate collaboration between people and nature. Sometimes, an entire village participates in the creation of the magnificent structure. On average, a bridge takes 10-20 years to attain perfect strength and shape.

These bridges also stabilise the soil and prevent soil erosion and landslides in such rain-affected areas. Unlike the steel or concrete bridges that rust and lose durability with time, the living root bridges are alive and gain more and more strength over the years. 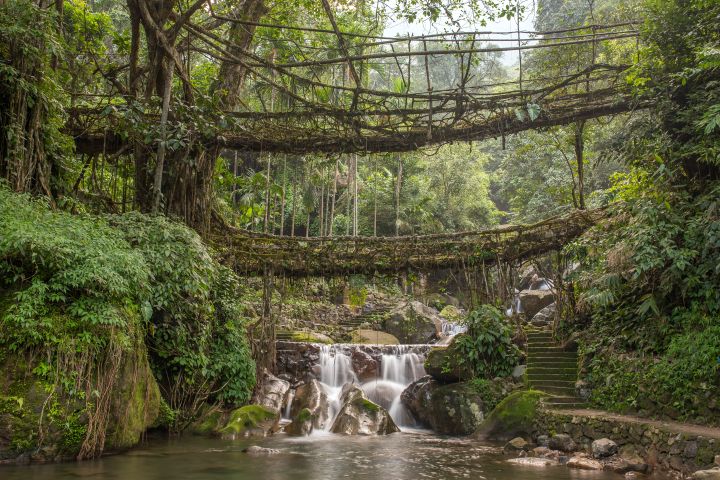 Located in a village named Nongriat, the Double-decker living root bridge is 30 metres long. Getting here is no easy task as it is situated 2400 feet down the valley. You will have to climb down 3500 stairs to have a look at this nature’s marvel. The trek starts from a village named Tyrna, which is about 13 kilometres away from Cherrapunjee town in Meghalaya.

This living root bridge is said to be 250 years old and is amongst the most beautiful and picturesque places in the world. Initially, there was a single bridge over the river named Umshiang. But due to torrential rains in monsoon and subsequent overflowing of the river, the lower bridge was often left underwater. Hence, the villagers built an upper bridge, thus making it a double-decker bridge. 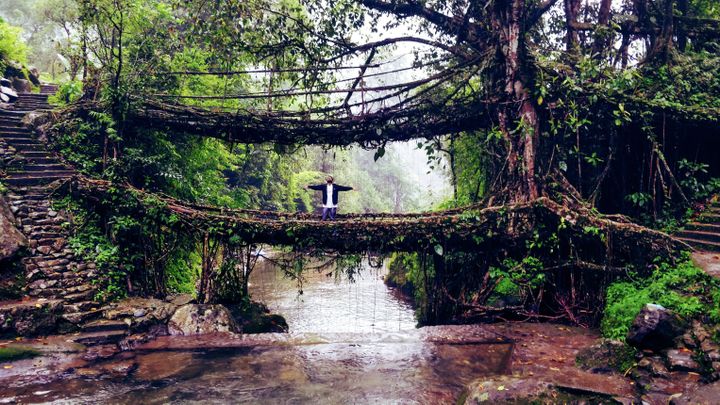 We started from Tyrna early in the morning and, after 1500 stairs, reached a village named Nongthymmai. There’s another small but gorgeous living root bridge at this place that you could check out. After that, we crossed some iron suspension bridges across some rivers and reached the Double-decker living root bridge in Nongriat in 2.5 hours total. The bridge stood in all its glory with the crystal-clear Umshiang river flowing down below. The setting is similar to a fable from movies like Avatar or Lord of the Rings.

The trek from Tyrna to Nongriat and back can be done in a single day, but we suggest you book a stay down in the valley at Nongriat village and spend a night with the locals there. If you trek further from the living root bridge for one more hour, you will reach Rainbow Falls and a natural pool known as the ‘Blue Lagoon of Nongriat’. 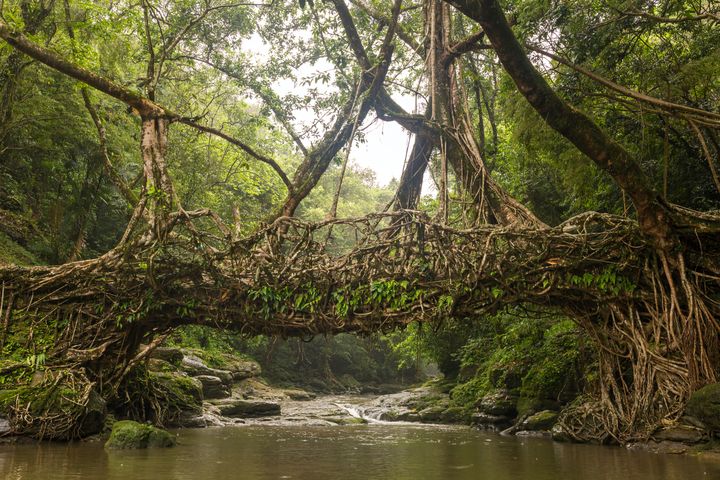 Once in Riwai, the single-decker living root bridge is a 300-metre hike into the Riwai village rain forest. The hike is easy, and we reached the bridge in about 20 minutes. This living root bridge is slightly thicker than the double-decker one and also has increased width. It stands amidst lush greenery with a stream flowing beneath it.

This is also a good choice for travellers who cannot trek to the double-decker living root bridge. The other popular living root bridges in Meghalaya are in the villages of Khonglah, Rangthylliang, Kongthong, and Myndring. Several of these have not caught tourist attention yet as they are located in remote locations.

Some small living root bridges are privately owned by a family, and you can only get to them by paying them some nominal fees. Some bridges hang just a few metres above the stream/ river, while some are as high as 100 metres above the valley.

As well as bridges, you will also find living root ladders to get to villages located on the steep slopes in Meghalaya. To visit these isolated bridges and ladders, you will need the help of a local guide and be ready to camp in remote locations in the valley. Are the living Root bridges worth visiting?

Absolutely! No second thoughts. The first glimpse of a living root bridge after an arduous trek is an out-of-the-world experience guaranteed to highlight your travels.

The bridges also support up to a few hundreds of living species, including birds, insects, vegetation like moss, and sometimes mammals. It's worth visiting to see the surroundings as well as the bridges themselves. They are also included in the tentative UNESCO World Heritage Site list.

Best time to visit the Living Root Bridges of Meghalaya

The state of Meghalaya flaunts pleasant weather throughout the year. Hence, except the monsoon season (June to September), you can visit the living root bridges anytime. Monsoon is when the area receives excessive rainfall, and the trekking trails become slippery and sometimes dangerous. The winter months (November to February) are more preferred by the tourists for the trek. 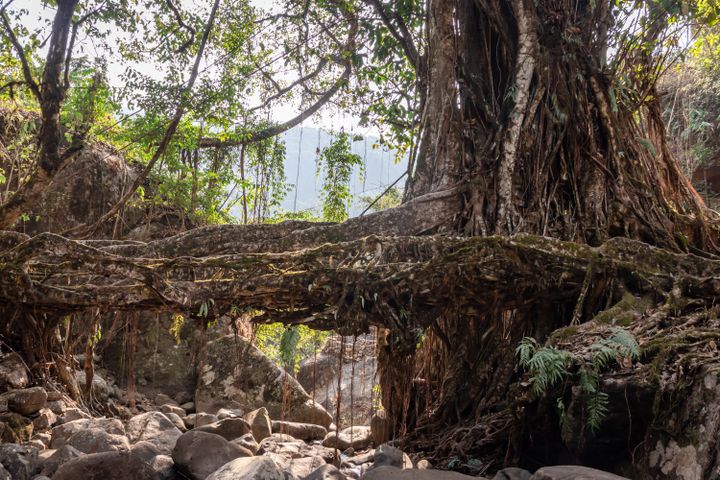 How the bridges are built

Meghalaya is home to villages like Mawsynram (the world’s wettest place, receiving 11871 mm of annual rainfall) and Cherrapunjee town (which comes second, receiving 11430 mm of annual rain). Due to heavy downpours in the rainy season, the remote villages in Khasi and Jaintia Hills are periodically isolated from the nearby towns.

Centuries back, the village ancestors discovered the unique quality of the roots of the Indian rubber tree (Ficus elastica) to build bridges across flooding rivers. This tree develops aerial roots that grow above the ground. The tribesmen planted rubber trees on both the sides of the river and pulled, shaped, tied, and twisted its aerial roots together as they grew. Then, they channelled the roots through hollow canes of betel trees and directed their growth in the direction to reach the opposite bank.

Once the aerial roots reached the other side of the bank, they were grounded into the soil and allowed to penetrate into its depths; thus, forming a bridge. A temporary structure built out of wood or bamboo was placed on the bridge, which acted as a scaffolding for the roots to grow. The roots eventually merged by fusion called anastomosis and strengthened over time to form a strong bridge, locally known as Jingkieng Jri.

The art of building the living root bridges is believed to be over 250 years old. Once fully grown, these bridges are said to last for 500 years. Some roots grow old and decay, however new ones grow and take their place, providing long-term stability.

Pooja Shah is the owner and travel content writer at Fairytale Studios. She is a lively ball of energy who refuses to spend the majority of her life behind four walls in a cubicle. She documents places beyond the usual sought-after destinations in her blog and hopes to inspire her readers to leap out of their comfort zones and travel before life slips away. 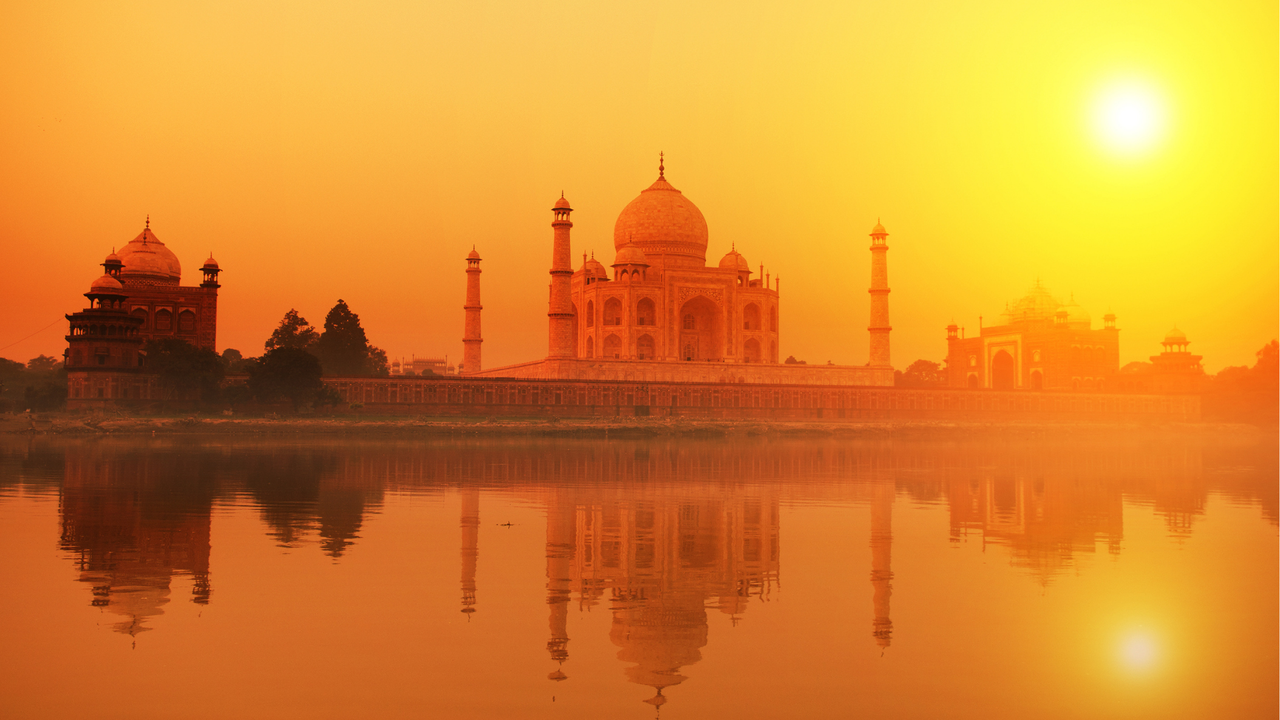 A huge and ancient country, India has been the birthplace of multiple civilizations over the last 10,000 years.
More from India
About Us Privacy Policy Archive Contact
© 2022 Faraway Worlds.